One of Rhodes' most recognizable locations, Seven Springs (Epta Piges), draws many tourists each year. Seven Springs is a cool, magical landscape, a real oasis even in the heat of high summer, swamped in greenery. A Natura-2000 protected zone that is waiting to welcome you to experience a unique tranquil experience!

One of the most charming destinations on Rhodes, Seven Springs (Epta Piges) offers a cool, magical landscape, a real oasis, even in the heat of high summer, a charming retreat in the most lavish of Mediterranean greens. Water flows out of the springs all year around, which is forming a small lake. The lake remains replenished thanks to a dam built by the Italians, in order to provide the nearby settlement Kolympia with fresh water.

The access to the lake at seven springs is very popular with visitors and offers a unique experience. If you feel adventurous enough,  you can to walk through the 186 meters long and 2.5 meters high and very narrow dark tunnel to get to the lake. This tunnel, constructed back in 1931, leads the water that flows out of the seven springs and from the river Loutanis into the lake.

Walking through the dark tunnel with your feet in the running fresh water, is an exciting experience, but don't try it if you are claustrophobic. As an alternative route you can simply follow a walking path, right above the tunnel, to the lake. For walking through the tunnel we recommend light shoes or flip-flops as you will have to walk though ankle high running waters. If it makes you feel more comfortable, you can also use a flashlight. 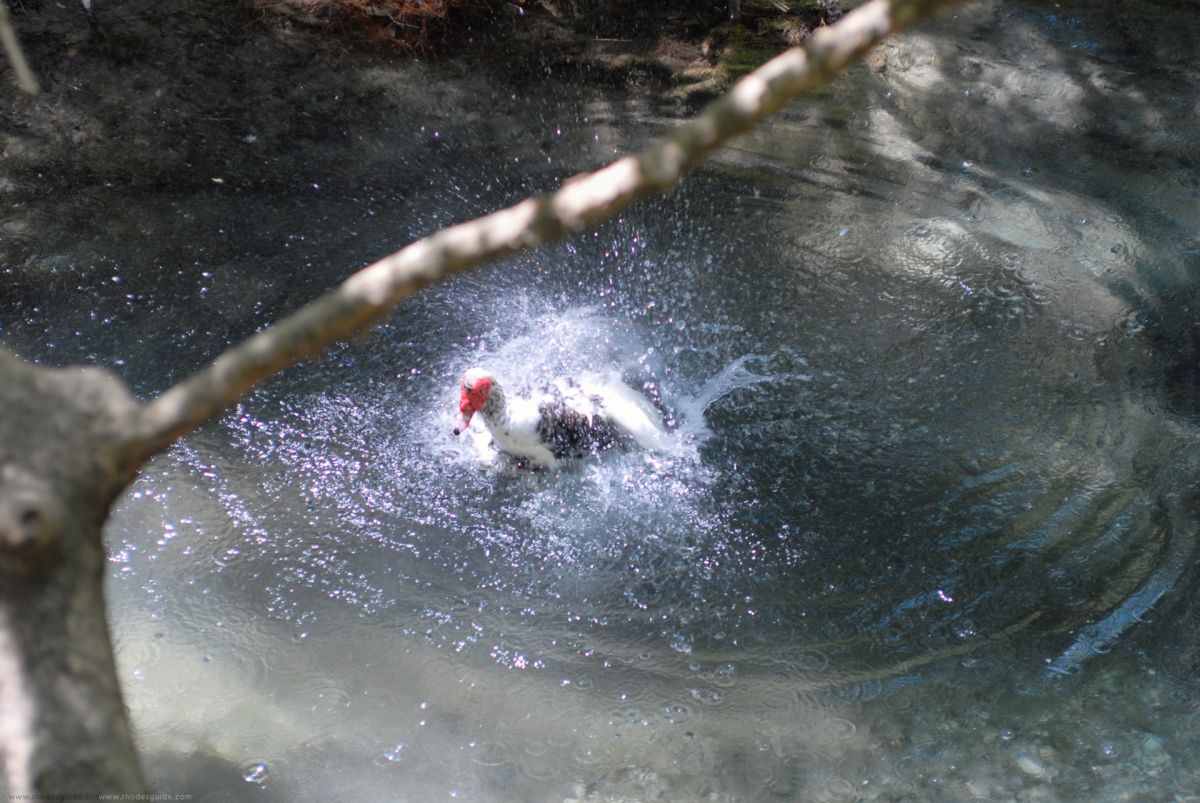 The lake at Seven Springs is also suitable for swimming. Just keep in mind that the waters are quite cold (even in the hottest summer months), and that since the water is fresh there is less water buoyancy.

The area of Seven Springs and the nearby forests are also suitable for walking and trekking. It is always recommended that you carry a bottle of fresh water with you. For walking in the areas around seven springs it is also important that you wear sturdy shoes.

The historic restaurant - taverna at Seven Springs is also worth your visit. Here you will find food cooked with local ingredients from local sources which are prepared based on traditional Rhodian and Greek recipes.

The area belongs to a Natura 2000 protected zone (GR4210006) together with the Valley of Butterflies (Petaloudes) and Mt. Profitis Elias. 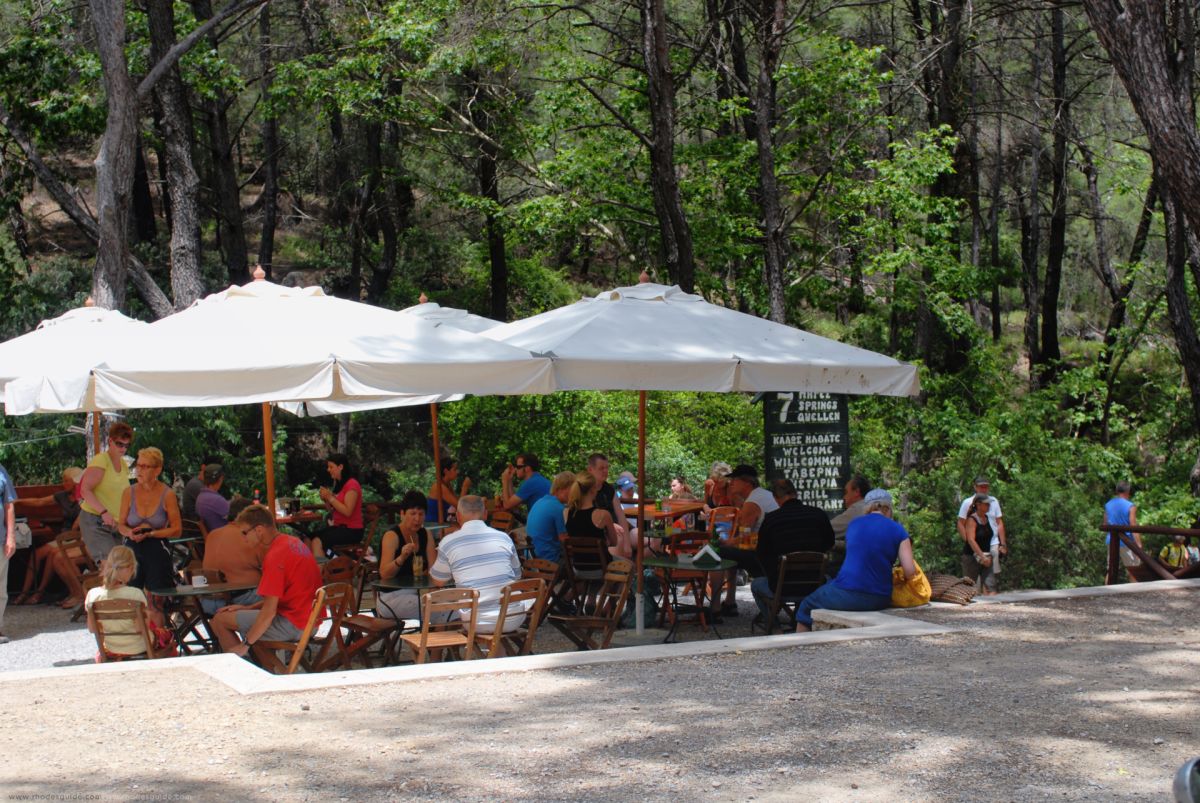 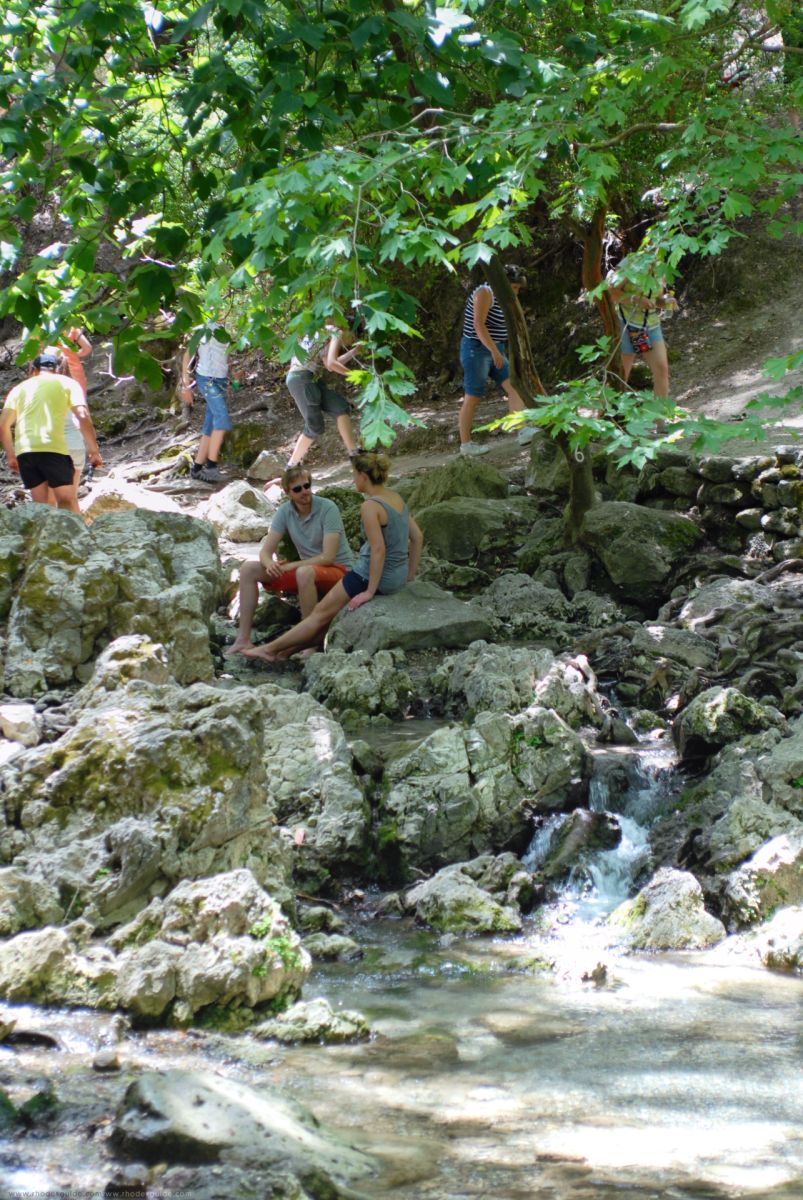 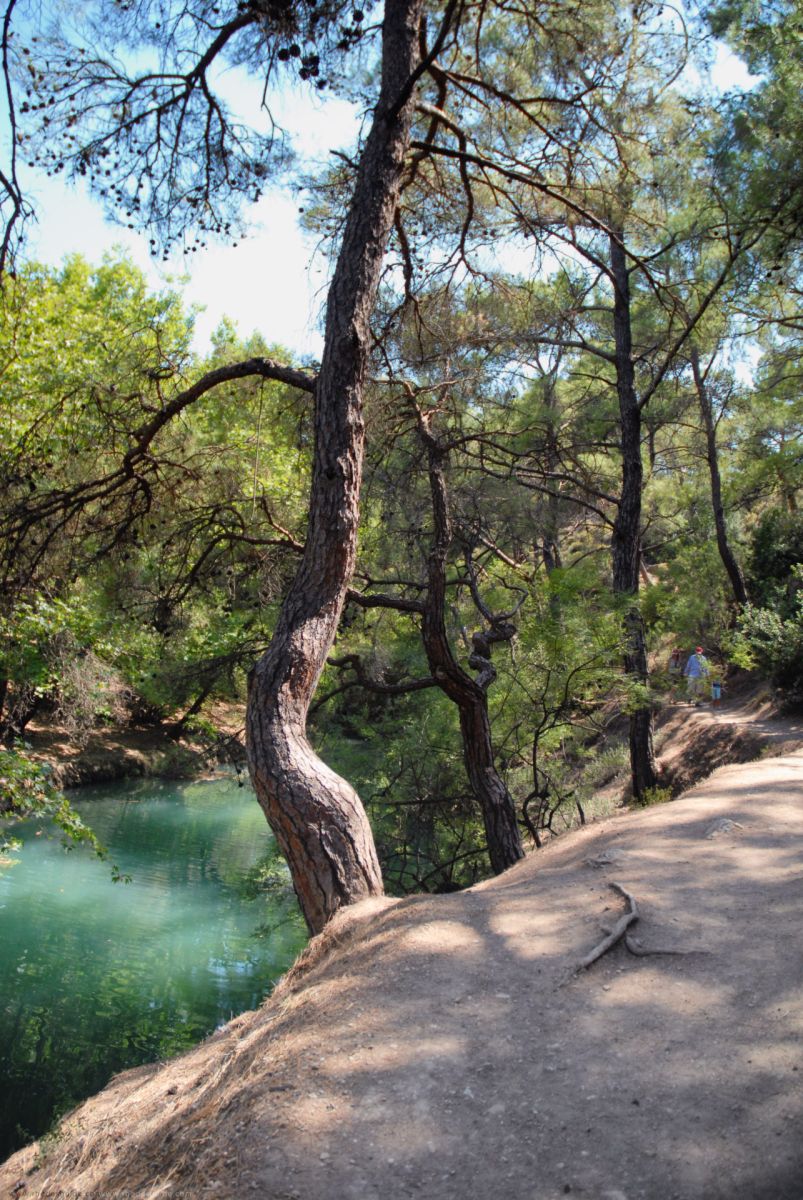 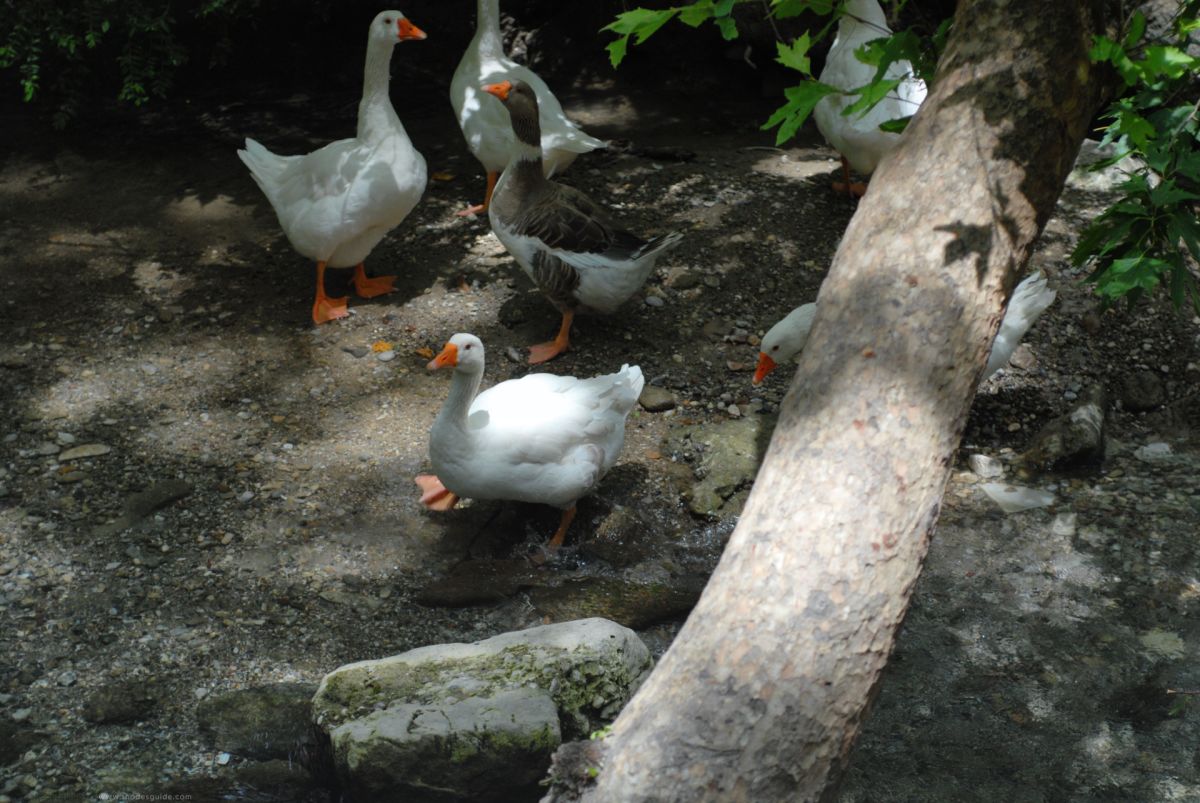 Lindos offers two different beaches, sharing the same bay. There are sunbeds and umbrellas everywhere, and the beaches are well occupied, but not necessarily crowded.

There is a restaurant named Epta Piges in Seven Springs that serves barbecued 30-day-matured steaks with authentic butcher cuts like t-bone, tomahawk, and other varieties.

That really enriched my experience. The steak was prepared exactly as I requested. I returned solely for the steaks.

Something free to do, for once. We arrived at Seven Springs very early, so there weren't many people around. It's a lovely location, and going through the tunnel was a lot of fun. I have read several reviews that said it was disappointing. We didn't have any expectations when we went, and we weren't disappointed. Given that there are some rocky areas in the tunnel, I do advise wearing water sandals or shoes. It wasn't always comfortable being barefoot, but it was still fairly doable. The water is just above knee height near the tunnel's end.
The taverna also had some delicious meal options, but we chose not to stay and eat there.

Even if the small waterfall is not much, a trip to the Seven Springs is worth it just for the delicious food at absolutely fair prices! We will definitely come again. The tunnel is quite funny, but also a bit scary!

Visiting the seven springs was a nice change from the daily beach routine for us. The walk through the water tunnel is for people with claustrophobia and a height over 180cm not recommended. But you can reach the lake from the path that runs above the tunnel as well.

I have to admit that we expected more, the area is very nice and quiet though and there is a nice little river. There is also a tunnel, which we did not know that you can walk through, so did not manage to see the waterfall. There is a restaurant right inside the nature where you can eat something. There are also peacocks and ducks, which are happy about bread (but not recommended as it is not their natural food). People with limited mobility will not find it easy to visit.

We took the regular bus between Rhodos and Lindos (runs every half hour) and walked the three km from the highway down to Seven Springs. Using the GPS in my husband's phone we then hiked 4 km through the forest to the Tsampika Monastery. The first bit was a bit of a scramble through dense forest, so it should not be attempted without a GPS. We connected to gravel paths and hiked up the back of the mountain just north of the monastery and were rewarded with amazing views of the bay below. Actually came out on the highway and found the monastery a bit downhill north of this mountain, but even if climbing the mountain was the result of a slight miscalculation. The view was worth every extra step. October was plenty hot for this trip, it probably should not be attempted during the summer months, as it is too strenuous for dense heat.

Went last august 2011 really enjoyed it took over an hour on moped to find it but well worth it. The green bluey water was lovely. Picturesque and a must is to walk through the tunnel.

I was there about 2 months ago. It was one of my favorite places in Greece. Wear good hiking shoes and bring some good aqua shoes to walk through the tunnel. The water was running so fast, it seemed like a foot massage. I climbed out to the waterfall and took pictures. I don't understand some of the less positive comments. I thought it was well worth the drive.

Visited May 2011. Well worth a visit. Tunnel should be one way traffic only!! Forest walk becomes a scramble higher up.
Water in tunnel about 10 inches deep fast flowing. Signposting to lake poor.

Ive been coming to Rhodes for 13-14 years from 18 months, im now 18, and each year we go to Epta Piges without fail becuase of its beauty and because of the long tunnel of cold water.
I read a thing bout epta piges on some website, sayin the laake has never dried out, thats a lie cuz 3 years ago it was (probs cuz of the amount of shoes a flip flops)
Its just becoming a race to get the epta piges before the Italians all go there, otherwise its a fight for car parking spaces and a chance to get down the tunnel!!!
I would deffinately recomend it to anyone who visits this beautiful place, Also on reccomendation is the old 1930s ex-military hospitals and army base at profitis illyassos and also Petaloudes (Butterfly Vally)

I went to seven springs in sep 2007 with a greek friend, after staying in lindos it was lovely to venture out into the island and taste "proper" Greece. it was a beautifull day and the food from the little resturant there was really nice and authentic. lots of really good photo oppertunitys by the river and the family of peacocks come rite up to ur table and sit with you! i really would recommend visiting next time your in rhodes, i will deff be going back (for the fourth time!!)

Went to seven springs the day before yesterday (12th May 09). Walked through the tunnel. All was in order. Water was flowing and the lake was full.
A very enjoyable visit.

This location is no longer what it was. Water no longer runs through the tunnel and the reservoir is drained and far from picturesque. What water there is looks stagnant. Thankfully I had a rental car and just went somewhere else. Feel very sorry for those that paid to visit by bus and had no choice. Have been there a number of times before so to see it as run down as it was was very dissappointing

Absolutely brilliant the tunnel under the ground is ace. we go under it every time we visit. And the grounds are really relaxing. Dont miss it when you go.

I visited the seven springs in October 2006, and it was a fantastic place, a calm and relaxing atmosphere, and also some exotic birds. If you go there, you really should walk through the tunnel, its around 200 m longs, and I wouldnÂ´t recommend it if you suffer from claustofobia, because its pitch black, water running under your feet, and its really narrow... but if you want something special to remember when you come home, go for it! Its said that if you go through the tunnel you loose all your fears and u will be 20 years younger, so now am 0 years then :)

One of the most serene places on the island, totally different to all other tourist attractions. The litttle restaurant there has excellent greek food and occasionally there are small stalls selling little gifts there too. And there is a family of peacocks there too, who wander round in the carpark