On the north-western shore of Rhodes, close To the promontory of Agios Minas (the Ancient Mylantio) lies the third of The island's ancient cities - Kamiros.

Kamiros was one of the three large Doric cities of the island, which united with Ialysos and Lindos in the 5th century B.C. to create the powerful city - state of Rhodes. 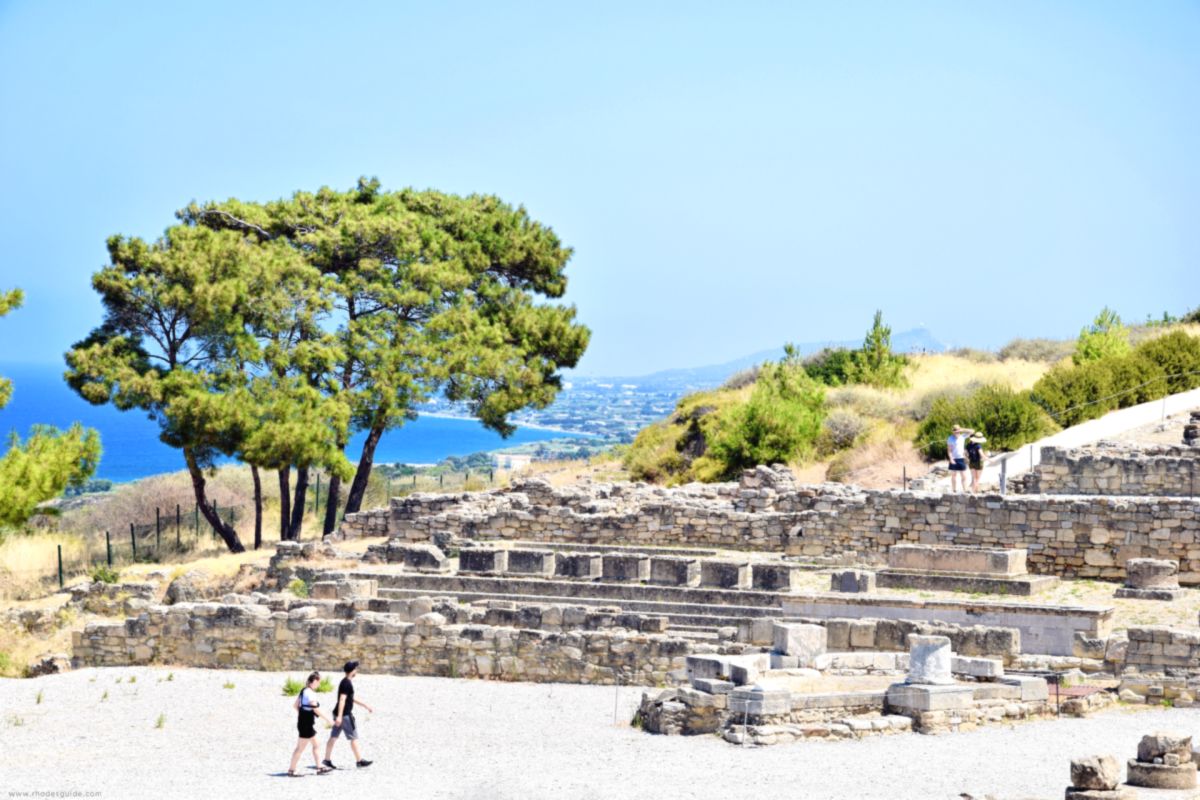 Although it was established by the Dorians, it seems like the first inhabitants of the area must have been Achaeans, as the ruins of an ancient Mycenaean necropolis close to the village of Kalovarda reveal. Kameiros was basically an agricultural society which produced oil, wine and figs. During the city's golden era of the 6th century, it was the first Rhodian city to cut its own coins. 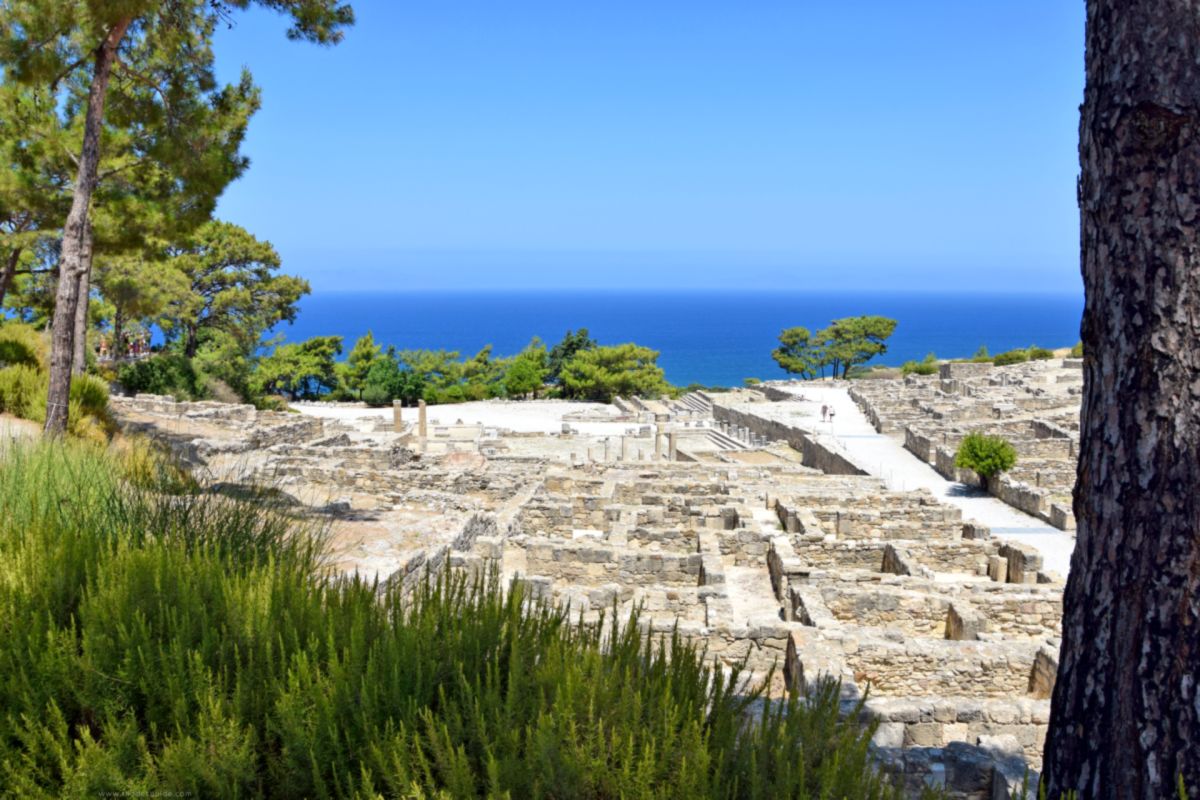 Kameiros (Kamiros) has been often compared to Pompeii, something which is not correct since Kamiros did not fall into decline because of a natural disaster. Its decline, like the decline of Ialysos, was the result of the gradual abandonment by its residents, who decided to move to the city of Rhodes, which as mentioned above, was established in 408 B.C.

In 1929 archaeologists localized the ruins of the ancient city, and the excavations which brought it back to life continued till the end of World War II. 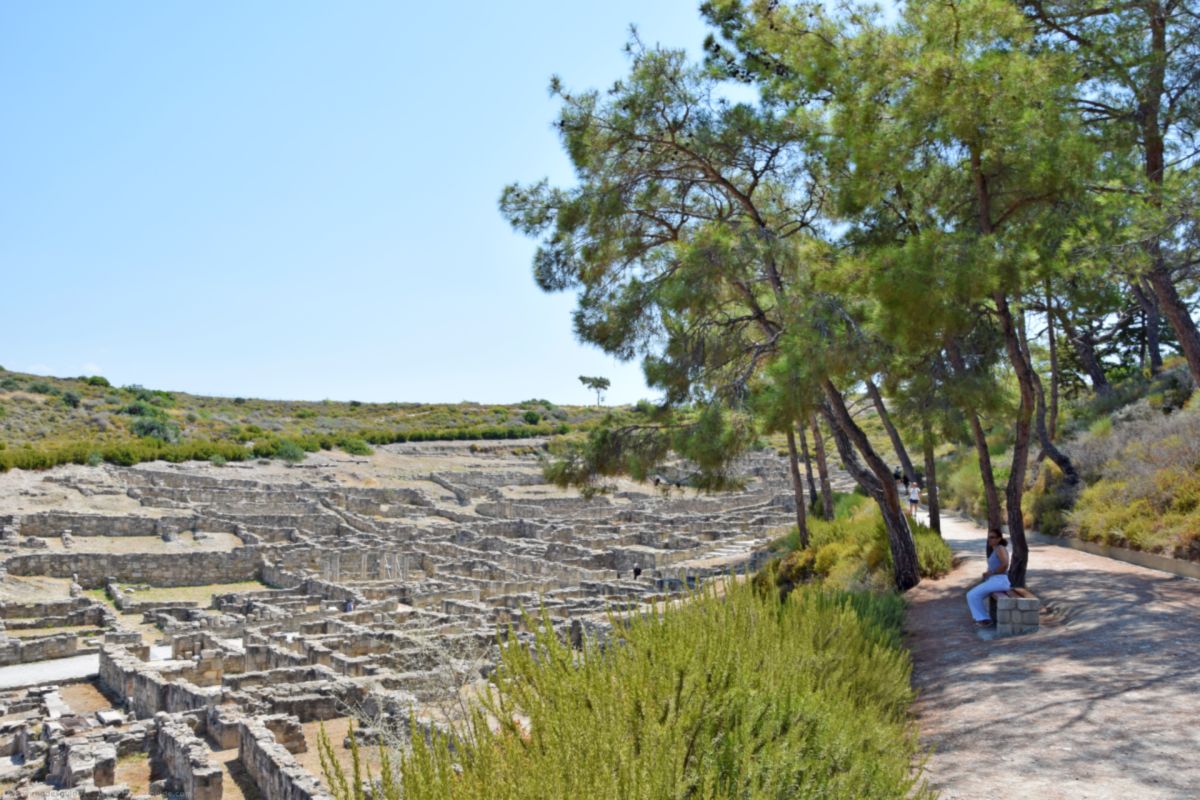 The motive to start the excavations was the accidental discovery of some ancient graves, as well as the name of the area, which was Kameiros (Kamiros), and which had been reforested by the time. The findings which had been revealed by the excavations, which are very rich and important, have been taken to the British Museum and the Louvre. We hope that some day these archaeological treasures will be given back in order to be exposed to the public by the archaeological museum of Rhodes. 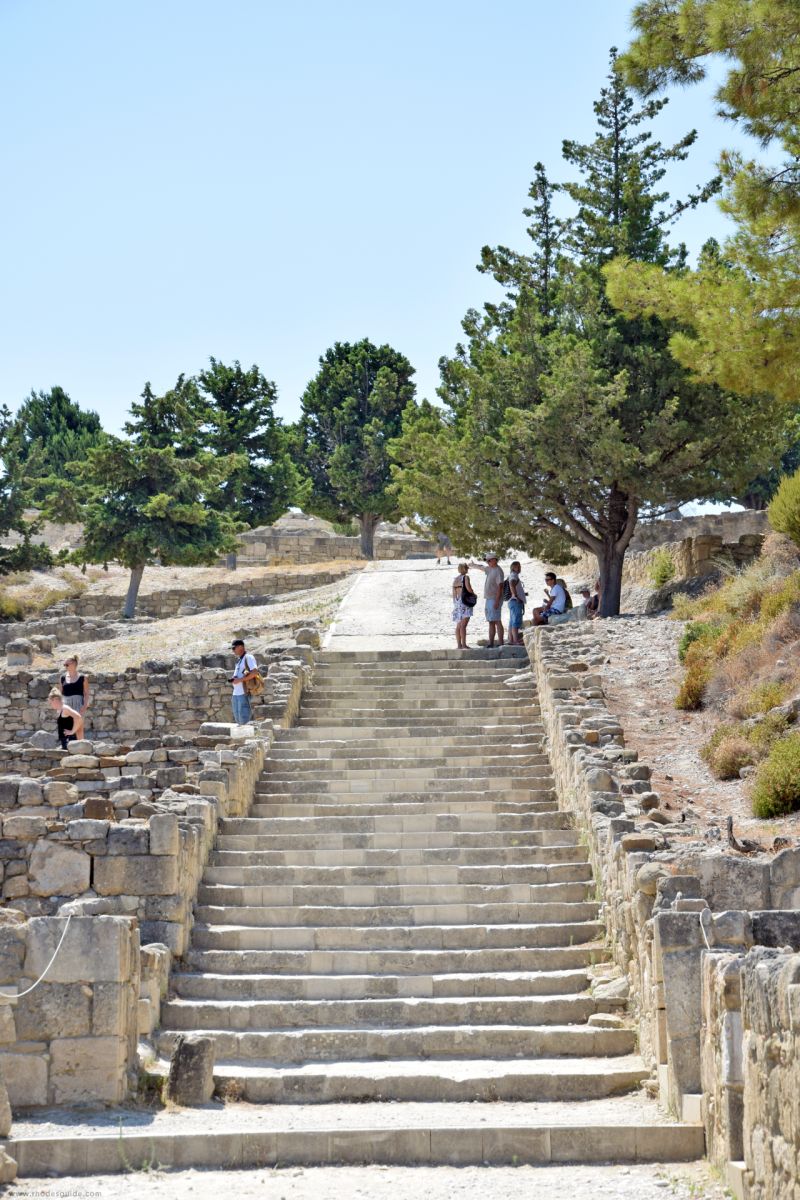 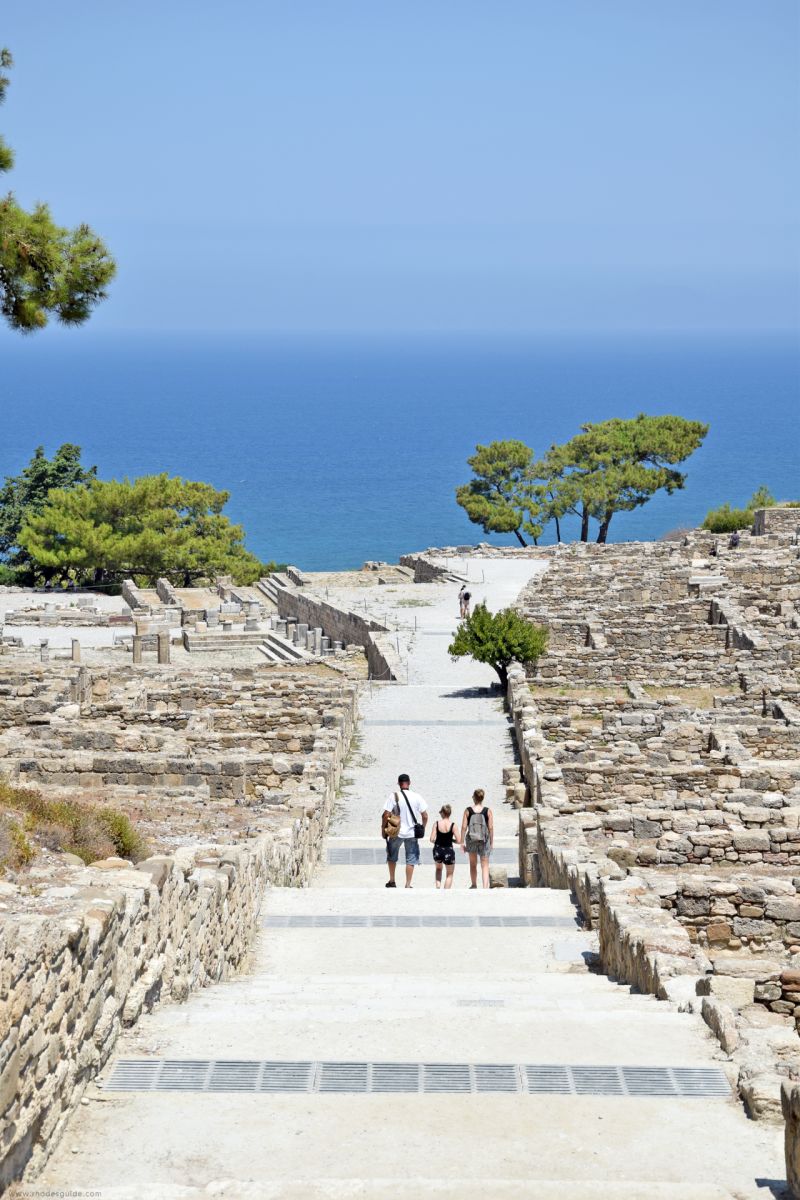 The sanctuary of Athena

The sanctuary of Athena existed on the acropolis of Kamiros (Kameiros) from the ninth century BC. All that has survived of the earliest phase are the deposits, in which the numerous votive offerings were deposited, probably during a rebuilding phase during the sixth century BC. It was perhaps at this time that the first temple of Athena was built. The deposits consisted of a rectangular pit of great depth, as well as small cavities in the rock in the where the Hellenistic temple was later built. 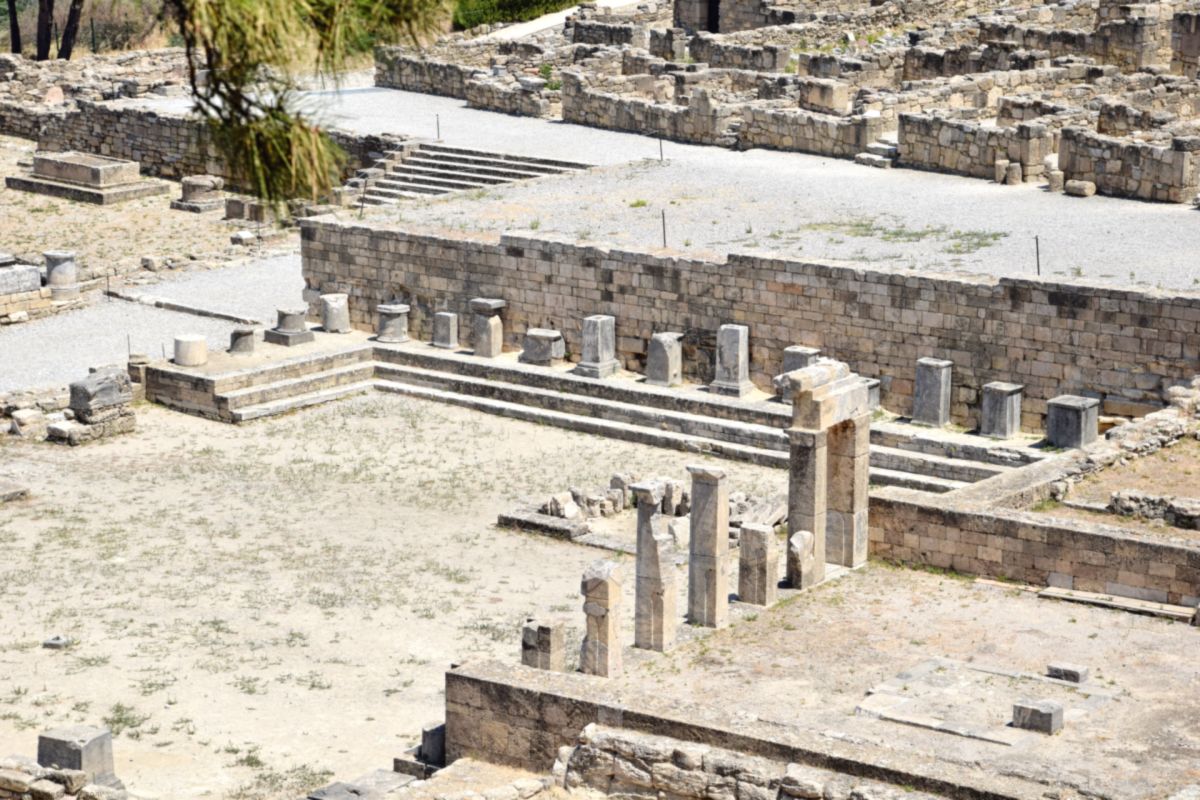 Large-scale building works were carried out in the sanctuary during Hellenistic times, perhaps after the earthquake of 227 BC. Its architectural planning was based on the terraced arrangement which was popular in the Hellenistic period and is also encountered in the sanctuary of Lindos.

On the lowest terrace at the end of the main street, stood a small altar, from which ramps led to the ends of the second trace, where a stoa in the Doric order with a wide esplanade front of it was located. The stoa was 204 m. long and was one of the largest in the ancient world. 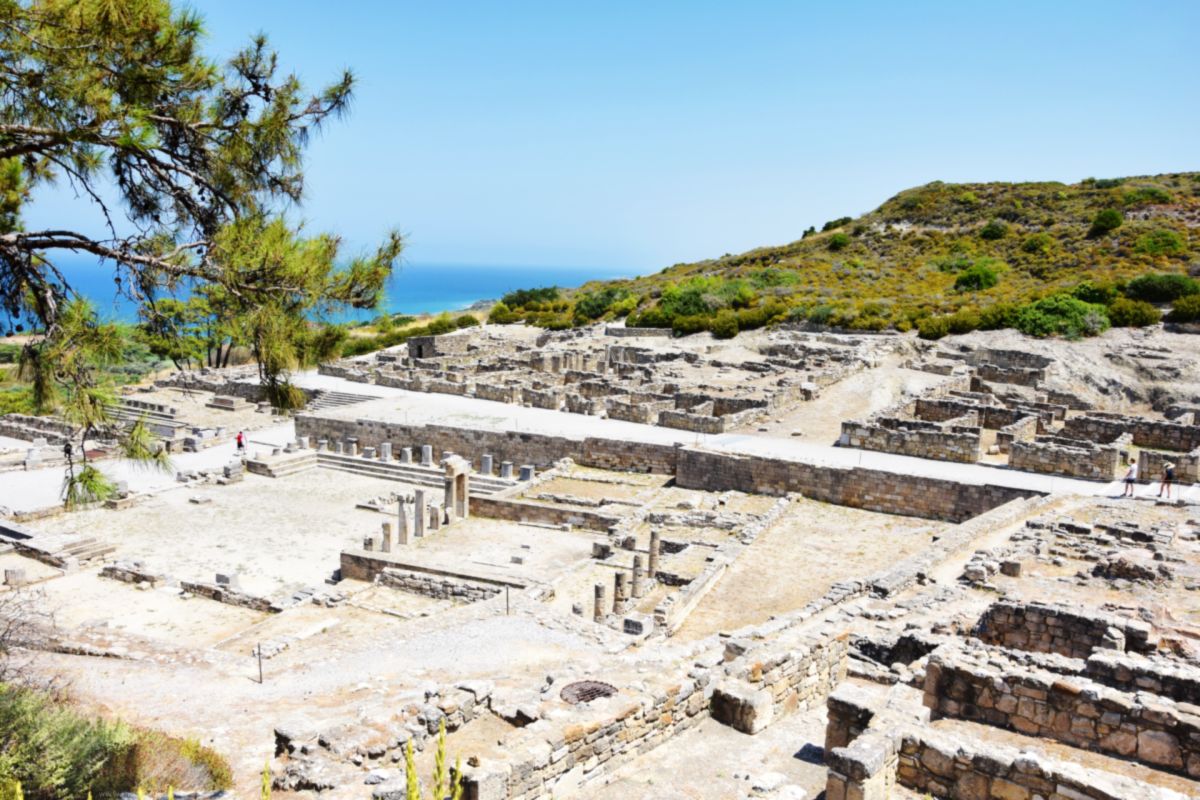 At its rear a row of rooms served the needs of the sanctuary. In the middle of the stoa the rooms were interrupted by a staircase leading up to the highest terrace, on which stood the temple of Athena in the inner sacred precinct or temenos.

Tharri Monastery is surrounded by nature, a perfect place to experience calmness and tranquility. The Monastery is well known for its hospitality and attracts many visitors.

I've visited Kamiros 3 times and every time I was fascinated by the ruins and the ambiance. It invites you to sit down and relax under a tree, enjoy the beautiful view and listen to the cicadas. The sunset is awesome. Very few people around, which is wonderful! Highly recommended. I'm pretty sure I'l go back for more!
A. De Barros
Hartsdale, New York

I visited Ancient Kamiros about 20 years ago and I’ve never been able to forget it. I had a strong feeling of what it must have been like to live there. It was palpable and for me, somehow emotional.

I was a licensed guide from 1963 until 2000 and my favourite site was Kamiros which was never promoted for excursions only when included in the tour of the Butterfly Valley.
Have learned a lot in private from archeaologists but just wish to mention that only when Schliemann discovered Mycenea were they able to date the vases found in the necropolis of Kamiros found + or - 20 years earlier.
And in Kamiros there are no souvenir shops and cafeterias.

I would like to see more information about Kamiros. Kamiros is the first city state on the island of Rhodes dated from the late bronze age until 407 BC. It is one of the most important and oldest Greek cities of the Greek world and its history needs to be discovered and learned. Kamiros best findings are in British, France and Italian museums. Kamiros greatly contributed to Greek and European ancient history and civilization and unfortunately this great archaeological site is not well promoted and little is known today.
A conference is planned next year, on July 26 and 27.
For more information please contact: paideia[at]snet.net. For those who would like to present papers for the history of Kamiros please contact me.