The Acropolis of Rhodes, along with the Ancient Stadium of Rhodes, stood on the hill now known as Monte Smith. Only few surviving remains of the Acropolis exist to provide a faint idea of its original grandeur. Still, it is well worth a visit.

The Rhodes Acropolis dominated the western and highest part of the city. It was not fortified, unlike most ancient Acropoleis. It consisted of a monumental zone with Sanctuaries, large temples, public buildings and underground cult places. The buildings were built on stepped terraces supported by strong retaining walls. It was "full of fields and groves", in the words of the 2nd c. AD orator Ailios Aristides. The style of the Hellenistic architecture on the Acropolis of Rhodes was perfectly conveyed by the combination of natural beauty and artificial transformations. The buildings on the Rhodes Acropolis date to the Hellenistic and Late Hellenistic periods (3rd-2nd c. BC).

The Acropolis of Rhodes is on a hill overlooking the modem new town and medieval town. In antiquity the population of the city was supposedly larger than that of today and extended over the eastern slopes of Aghios Stephanos, which was later also known as the hill of Monte Smith, named after the English admiral Sir Sidney Smith who established an observation post in 1802 to watch over the movements of the Napoleonic fleet in 1802, right down to the city harbour. 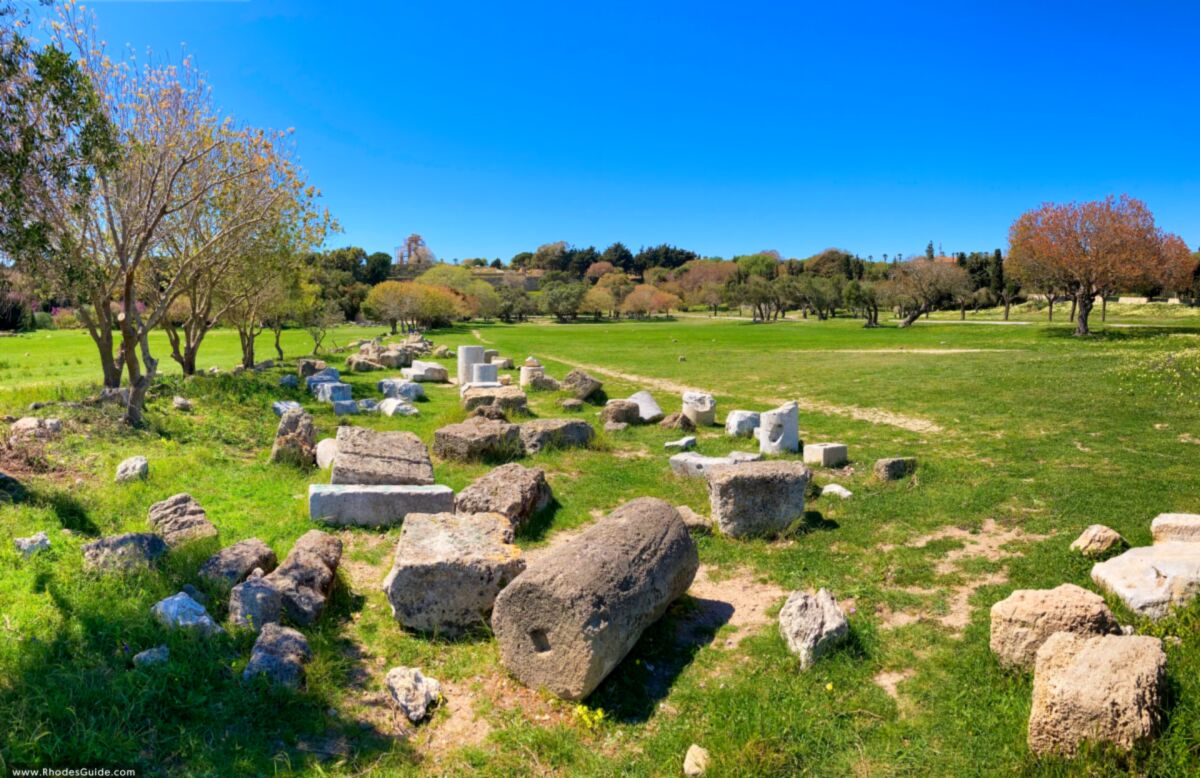 The excavations were carried out by the Italian Archaeological School during the Italian occupation of the island (1912-1945). From 1946 onwards the Greek Archaeological Service conducted excavations which added to our knowledge of the history and topography of the place. The whole of the Acropolis of Rhodes has not yet been excavated. An archaeological zone of 12,500 m² has been excluded from contemporary building with the intention of continuing excavation works to uncover the splendid ancient city of Rhodes.

There was extensive reconstruction during the Italian occupation in keeping with the spirit of the time. From 1946 onwards the Greek Archaeological Service carried out restoration work in the area of the Temple of Pythian Apollo, which had suffered considerable damage from bombing in the 2nd World War and from the weight of the artillery that had been installed there. During the 60's and 70's there was reconstruction work to the west foundation of the same temple, and in 1996 further reconstruction was carried out on the temple and the Nymphaia.

Monuments at the Acropolis of Rhodes

The most important monuments in the archaeological zone of the Rhodes Acropolis are the following: 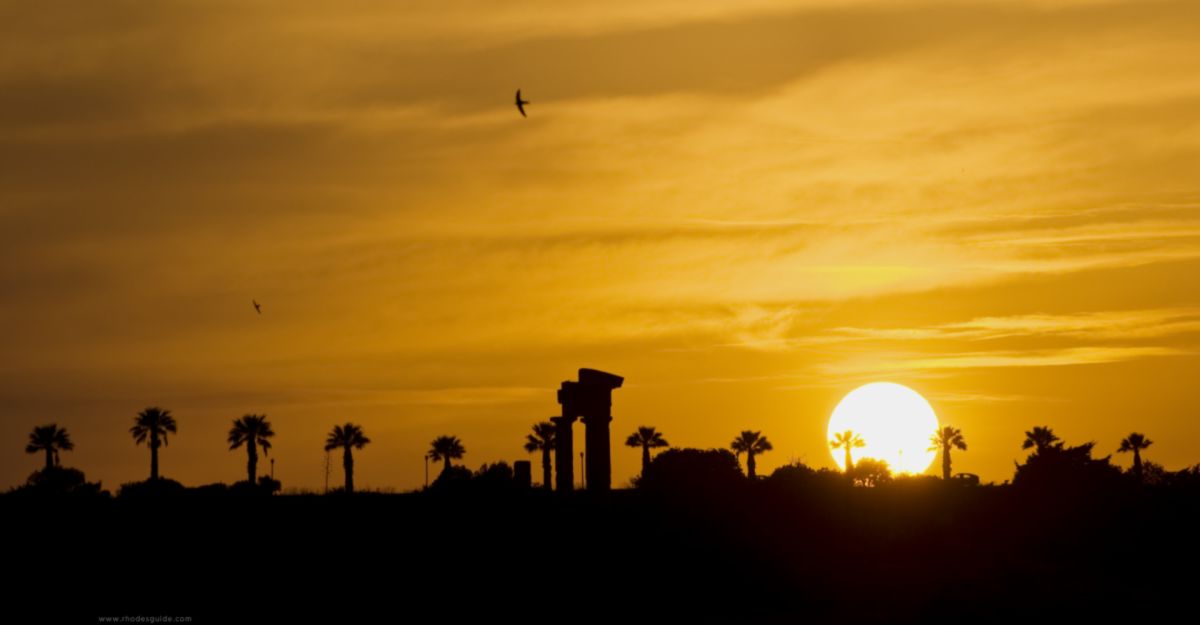 Temple of Athena Polias and Zeus Polieus on the northern edge of the Rhodes Acropolis.
It is orientated E-W and was a Doric peripteral temple (having a columned portico on all four sides). Four oversize column drums and parts of a capital and architrave still to be seen on the site are an indication of its original monumental character. This was where the Rhodians kept the texts of their treaties with other states. The temple stood in a larger temenos bounded by a stoa on the east.

"Nymphaia". This is to the east and south of the wall of the stoa.
It consists of four subterranean cave-like constructions cut into the rock with entrance steps, communicating passages and a large opening in the central part of the roof. There are recesses in the interior walls for statuettes. Water cisterns and lush vegetation complete the picture. They were places for recreation and worship.

Odeion.
Northwest of the Stadium is a small restored marble Odeion, a small reconstructed Theatre. It held some 800 spectators and is thought to have been used either for musical events or for attending lessons in rhetoric given by famous Rhodian orators. 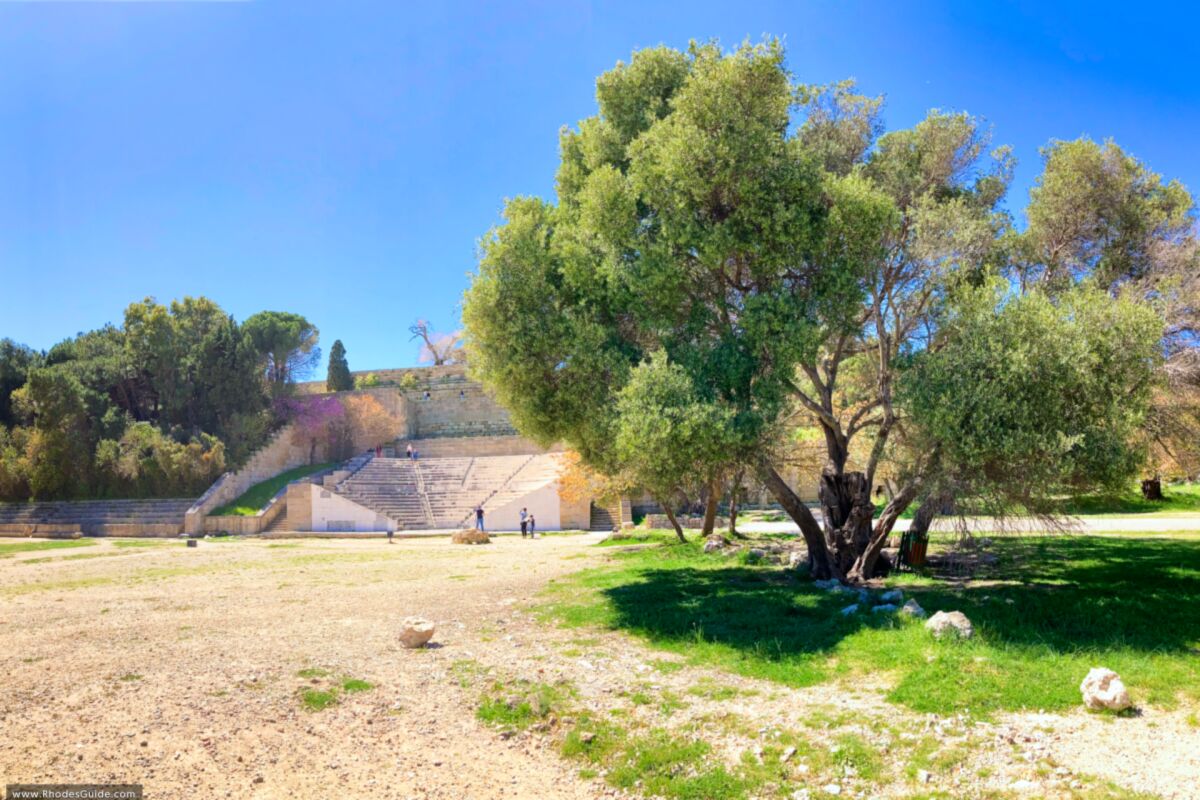 Temple of Pythian Apollo.
This stands on the southern part of the hill of the Acropolis, on the west side of a large rectangular terrace. It is orientated E-W. It was a peripteral temple, but smaller than that of Athena and Zeus. Part of the NE side had been restored with four columns and part of the architrave.

Stoa building.
Today the foundation wall of a Stoa is preserved, which must have had an imposing facade visible from the lower town and harbour.

Artemision.
On the NE side of the same terrace are the ruins of other places of worship, one of which is attributed to the cult of Artemis.

Ancient Stadium of Rhodes.
The Stadium at the Rhodes Acropolis, with a N-S orientation, is on the SE side of the hill; it was excavated and restored by the Italians. It was one stadion in length, namely 600 feet or 210 metres. The authentic original surviving parts are the sphendone (rounded end with turning post), proedries (seats of officials) and some of the lower seats in the auditorium. Also preserved is the starting mechanism for the athletes. 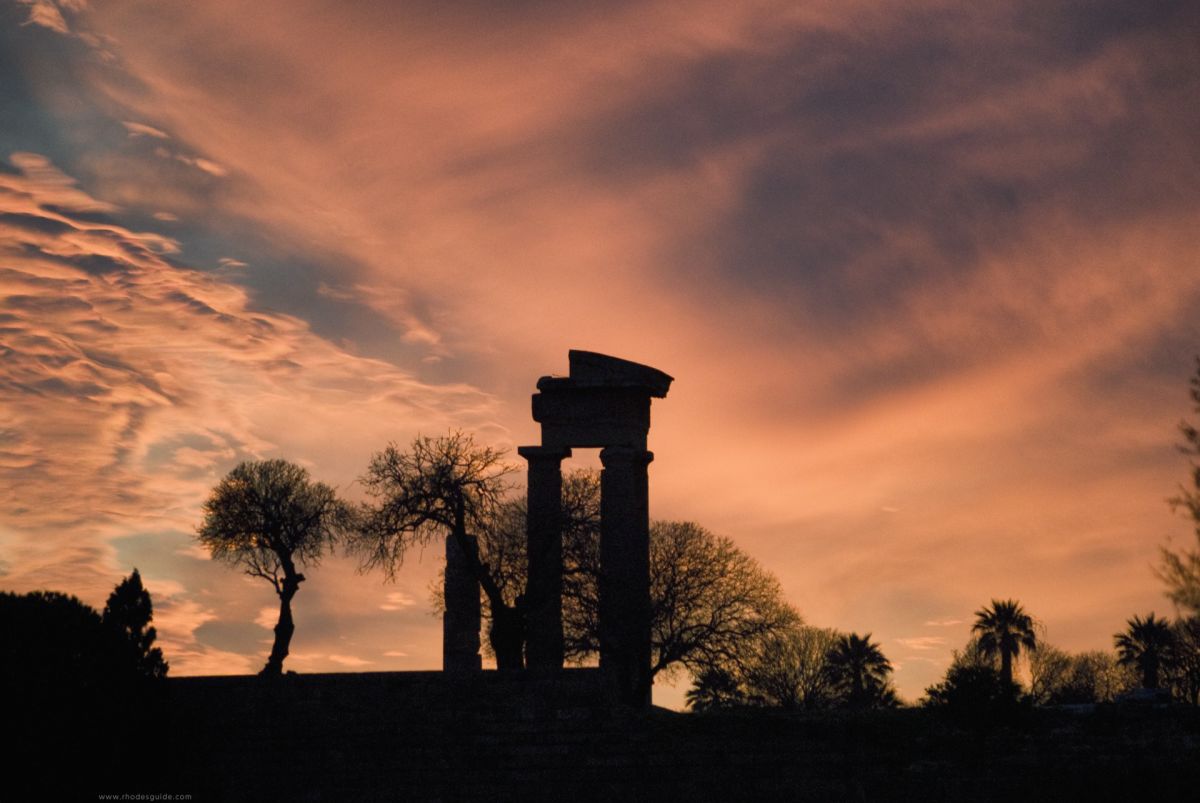 Gymnasium.
This is east of the Ancient Stadium. Part of the west side was uncovered in the past, and recently the NE corner was discovered under the modern refreshment pavilion. It was a large square building measuring some 200 m on each side. It was important for the works of art which it contained.

Library.
There used to be a fine Library containing notable works of rhetoric, near the Gymnasium and the Odeion, according to an inscription found in the area.

The castle of Asklipio (Asklepieion) was built in 1479 by Grand Master D'Aubusson at the site of an ancient lighthouse. In the Byzantine period, during the time of the Knights, the castle also offered the inhabitants of the surrounding villages protection against enemy attacks.

On the north-western shore of Rhodes, close To the promontory of Agios Minas (the Ancient Mylantio) lies the third of The island's ancient cities - Kamiros.

We had a great time when we were at the Acropolis of Rhodes. It is easy to locate and there is enough parking space. Don't be intimidated by the scaffolding on the pillars closest to the road; this was the only scaffolding. A vending machine, and an exhibition room in the compound's north wall that will tell you everything there is to know about the ruins and archaeological discoveries and restrooms are some of the things we found there. We loved watching the show while sitting in the theater, exploring the grounds and the stadium. According to what we've read, the acropolis was once a place for teaching and physical training, as well as a public garden and recreation area. Even now, it definitely had the atmosphere of a public garden. Well worth a visit if you are interested in Greek history.

A beautiful region in Rhodes where visitors may see the well-preserved Ancient Odeon and the Ancient Olympic Stadium. There are a few well-preserved pillar remnants and a temple with scaffolding. Access to the building was unrestricted.

We have just visited the Acropolis and were amazed how interesting it is. We had driven past but it is not until you climb down to it that you realise how much there is to see. Let's hope more excavation takes place.

Surreal! You can really feel the history in this place, I want to know more of it now!