While you will find the most important archaeological monuments at the Acropolis, interesting ruins are scattered at various points within the town and just outside it as well.

On the summit of the Lindos Acropolis are the ruins of the goddess Athena Lindia, temples from the 4th century BC As well as the Propylaea, the great Hellenistic Stoa and the Byzantine chapel of Saint John. In the time of the Knights of St. John, the castle is surrounded by sturdier fortress walls while the flowering period of Lindos extends as a naval power up to the 19th century.

According to myth, the cult of Athena Lindia was pre-Hellenic, although this is not borne out by the sporadic excavation finds. The history of the sanctuary begins in the Geometric period (9th c. BC). In the Archaoc period the tyrant of Lindos, Kleoboulos, revived the cult and built a temple, probably on the site of an earlier one. The Archaic temple had the same Doric tetrastyle amphiprostyle plan as the subsequent one.

The sanctuary was approached by a rough flight of steps. After it was burnt down in 342 BC, the present temple was built with the Propylaea and the monumental staircase. The Hellenistic stoa is later. In the 3rd c. BC the cult of Zeus Polieus was introduced, although Athena remained the principal deity of the sanctuary. In the Roman period the priest Aglochartos planted olive trees on the spot, and according to an inscription the Sanctuary of Psithyros was built close to the Temple of Athena (2nd c. AD). 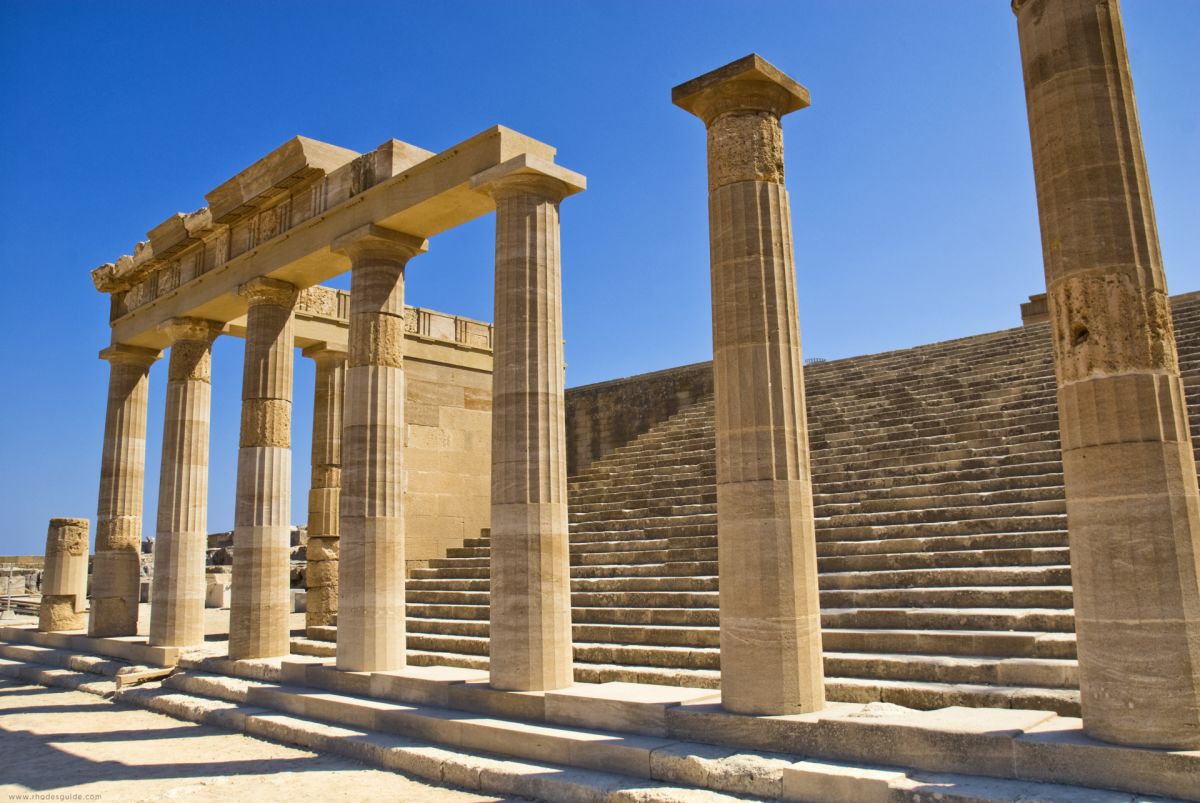 The archaeological site of Lindos extends outside and around the Acropolis and includes the following monuments:

Theatre
This is on the southwest side of the hill, below the Temple of Athena. The circular orchestra and the auditorium for the spectators were hollowed out of the the side of the hill. The proedries, honorary seats around the orchestra for officials, still survive. The auditorium has 19 rows of seats below the diazoma and 7 above it. The first three rows were also intended for officials, and low walls at their sides separated them from the auditorium staircases. Only five of the nine cunei have survived. The theatre held 1,800 spectators.

Four-portico building.
There are remains of a four-sided building in the extension of the skene of the Theatre. On the inside columns on all four sides supported a pitched roof and surrounded an open-air courtyard. The entrance on the northwest side had a porch (row of columns) which carried an architrave. The building held 1500-1700 spectators and was intended for religious ceremonies. At a later period the place was occupied successively by three Christian churches.

Boukopion.
At Vigli, northeast of the Acropolis, was the Boukopion, a place of sacrifices as the name implies. 38 inscriptions on the rocks around identify the place. A naiskos (small church) built of small field stones with a temple, pronaos and kind of vestibule contained the votive offerings (clay and bronze figurines chiefly of oxen) to a deity at present unidentified (10th-9th c. BC). 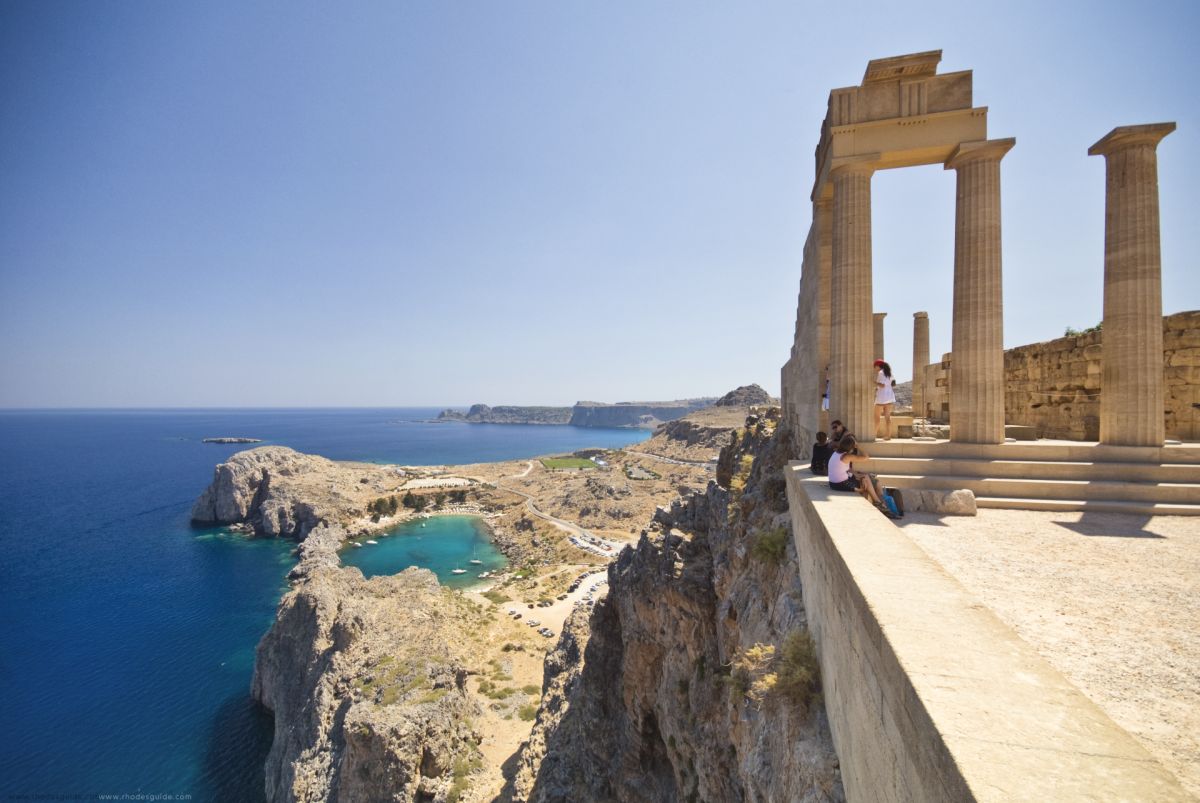 The cemeteries of ancient Lindos.

The cemeteries of ancient Lindos spread over the surrounding district; the most important two funerary monuments are:

The Tomb of Kleoboulos
This has no connection with the tyrant of Lindos, but was the tomb of a wealthy family. It is a circular structure with carefully built masonry and a vaulted roof. The doorway has a cornice decorated with palmettes. On the inside a bed hewn out of the rock was a kind of sarcophagus and had a cover, which has not survived (2nd-1st c. BC). Traces of wall-painting and the name "Ayios Aimilianos" testify to its conversion into a Christian church in a later period.

The Archokrateion
In the locality of Kampana at Krana, on the hill west of the Acropolis, there is a rock-cut tomb. The exterior facade has two stories; half-columns on the ground floor support an architrave with metopes and triglyphs, and on the upper floor pillars alternate with blind openings. On the first floor facade funerary altars were erected with the names of the dead inscribed on their bases. On the inside a passage led to a place for burial rituals. A total of 19 graves are cut into the walls of this chamber. On the sides of the hall pillars alternate with plaster panels. Its modern name of "Frangokklesia" suggests that in the time of the Knights it was used as a church.

The Naiskos of the Taxiarch Michael Stratelates below the village square. There is a shallow niche with a post-Byzantine representation of the Archangel Michael Psychopompos. The traces of earlier frescos date it to the Byzantine period.

West of it, near the remains of the Moslem cemetery, is a shallow niche containing the representation of a mounted saint, possibly 15th c. These remains are known as Ayios Georgios Kammenos.

The Church of the Panayia
The village church is oblong with a transverse nave of the free cruciform type. In 1489 Grand Master Pierre d'Aubusson gave money for the repair of the church and the construction of a groin-vaulted vestibule for it. The grand master's escutcheon and that of the commander of the castle, Pierre d'Aymer, can be seen on the south side of the smaller bell-tower. The frescos in the church are still preserved. The oldest inscription gives the date 1637. However, the painting in the church as a whole is listed as the work of the painter Gregorios from Symi, in 1779.

Ayios Georgios Chostos
An inscribed cruciform church with a cupola, which is on the northwest edge of the village. In the apse of the sanctuary are five layers of fresco painting belonging to the post-Iconoclast period in the 2nd half of the 12th c., and to post-Byzantine times. 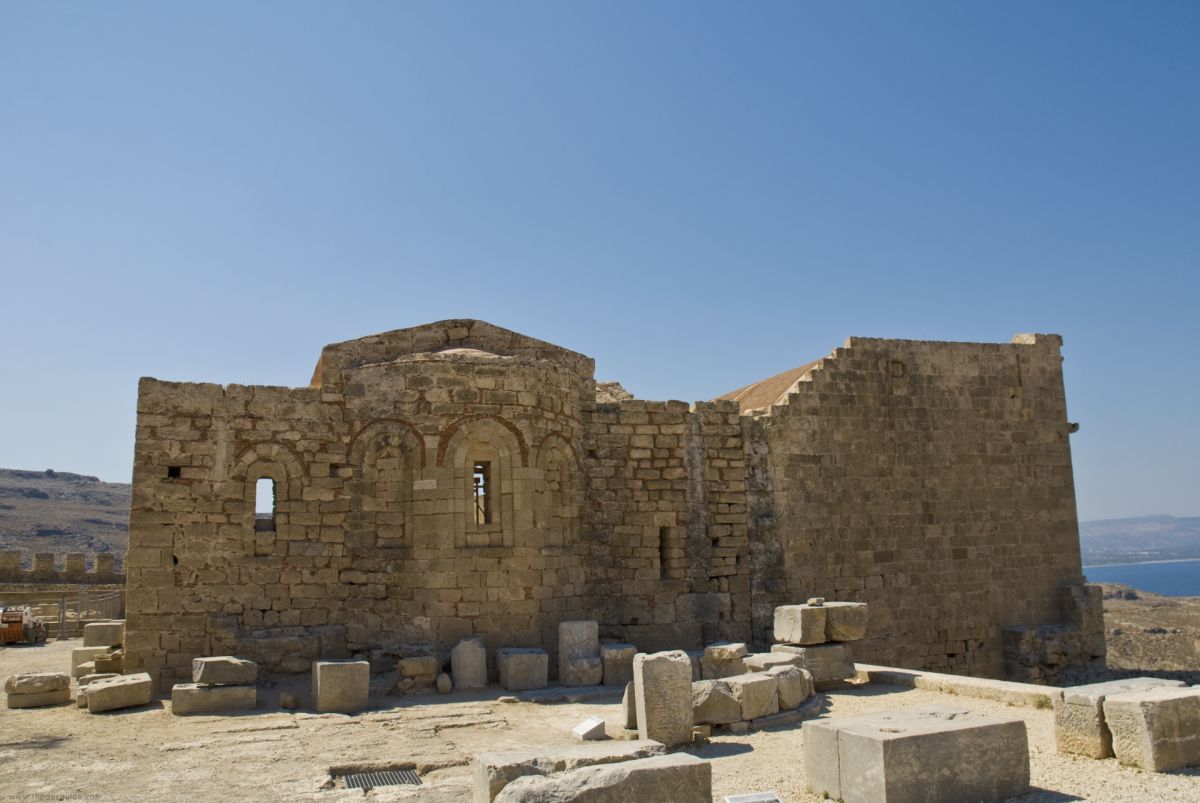 Ayios Georgios Pachymachiotis or Pano
This inscribed cruciform church with a cupola dates to 1394/95 according to an inscription on the south side of the front of the apse. It is decorated with full-figure saints in luxurious attire on the south wall of the church, hierarchs below the arch of the sanctuary and part of a representation of the Ascension in the vault.

Ayios Menas Churh
This the same type as Ayios Georgios Chostos. It has interesting late 12th c. frescos which are late Komnene in style but 15th c. in date.

Ayios Demetrios
A small barrel-vaulted church northeast of the entrance to the Acropolis. In a blind apse on its north wall can be seen a 15th c. St Demetrios on horseback.

In the locality of Vigli under the east cliff of the Acropolis the mosaic floor and marble tiling of an Early Christian basilica have been found, dating to the 5th c. 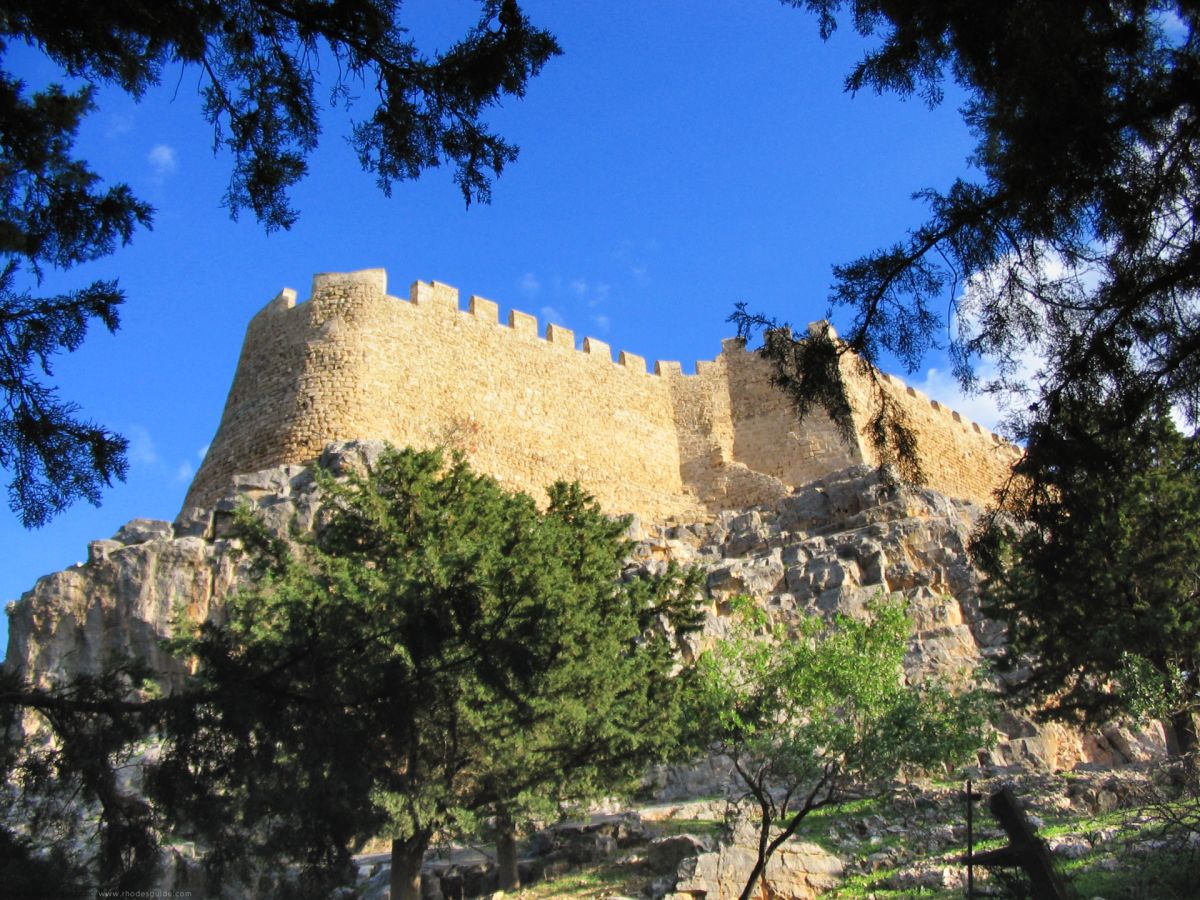 The modern village of Lindos

The entrance to the village is on the north, by its only square, which is now used as a carpark and has a large tree in the middle and a small fountain with many features from the period of the Knights. Rocks behind and above it recall ancient aqueducts. The graveyard is also at the entrance to the village, containing the church of Phaneromeni. A little beyond and below the square are the remains of the Moslem cemetery containing a few graves, whose typical grave markers have been demolished. The school has been moved to the side of the Megalo Yialo and the old building, beside the church of the Panayia, built in the neoclassical style, is now used by a local society for various cultural events.

The streets of Lindos are a maze of continuous buildings, chiefly with interior courtyards. Most of the houses have flat roofs, but some variety of types can be seen among the buildings that have not been affected by time and changes of use and shape. The material used in their construction is either the local quarried poros stone or field stones which have been plastered and whitewashed. The houses of Lindos all have features in common, but they can be divided into different classes: simple ones resembling the country cottages of the island, houses with a courtyard, and mansions. 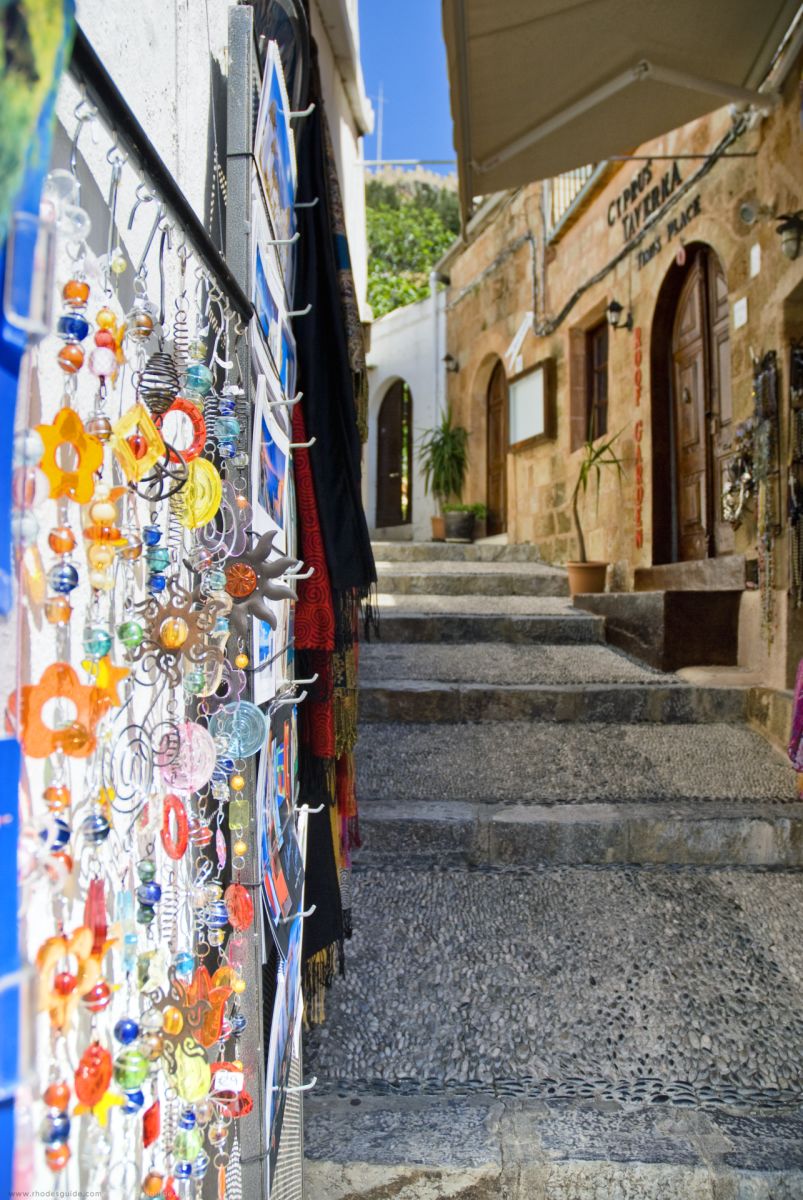 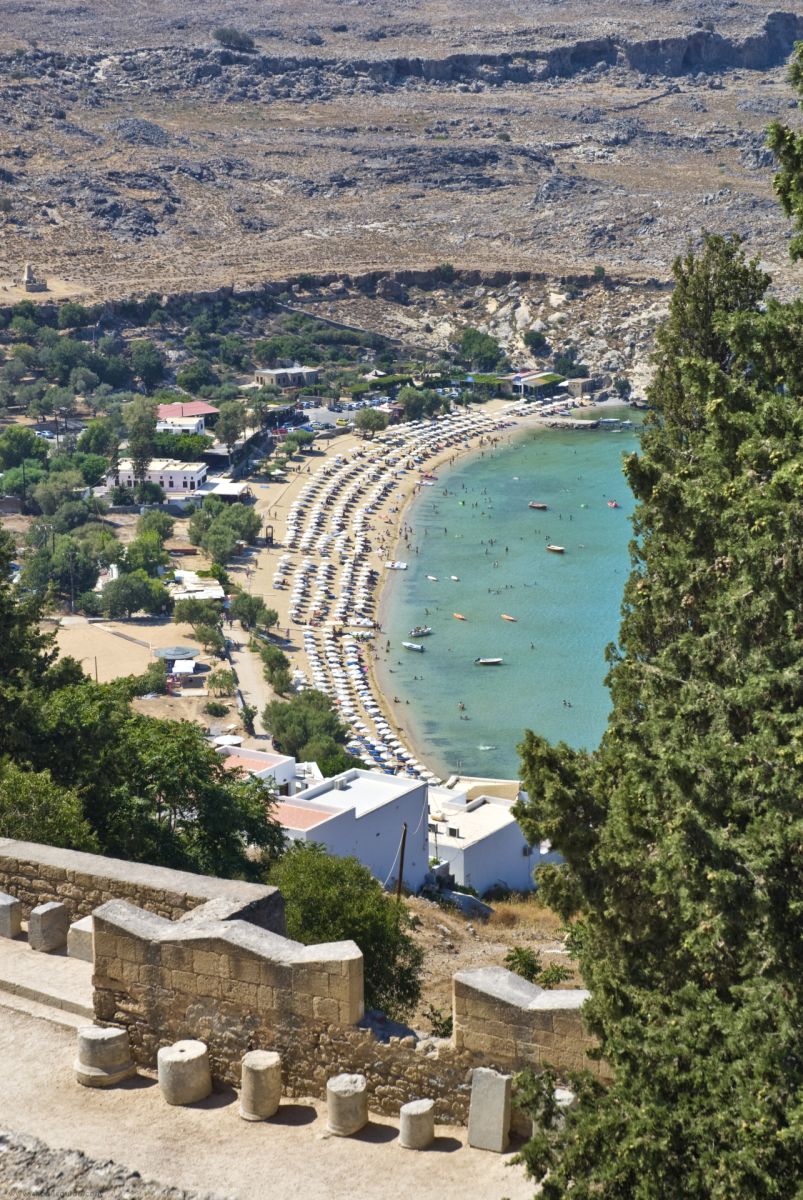 The most representative mansions are known by the names of their owners: the House of Papakonstantis (1626), of Kyriakos Koliodos, of Lefteris Makris (1700), of Krikis (1700), of Georgios, of Marietta Markoulitsa (1700), of Ioannidis, etc. With the arrival of neoclassicism in Greece at the end of the 19th c, Lindos, Like Rhodes town, adopted some of the new architectural features: large windows facing the street, two-storey houses with tiled saddle roofs and gable ends. The doors in the yard walls have jambs and lintels reminiscent of ancient temples. New houses were also built, which no longer had anything in common with the old mansions.

Kallithea (Kalithea) beach is one of the most popular among the locals. It is composed of many small creeks covered with pine-trees. The waters are deep, so you will have to be a bit careful when swimming there.

Went to visit the Acropolis last week.
Went by donkey taxi which was great and was totally amazed at this site, well worth going to see and feel this ancient place.
On the day it was free to get in also extra bonus!

We have been visiting rhodes for 15 years and cant get enough of it beautiful place beautiful people.

please don't it's cruel in the searing heat

Visit the acropolis on a donkey. Pictures are taken as you go up and the donkey ride is a memory in itself.