The Holy Monastery of Kalopetra (Kalopetra Monastery) dedicated to the Assumption of the Virgin Mary is located next to the Butterfly Valley, 8 km south of the village of Theologos and 23 km. from the city of Rhodes.

Built in a pine-covered mountainous area on the hillside of Mount Lefkopoda, "featuring a beautiful view", as reported by Edouard Biliotti and L 'abbe Cottret in their works for Rhodes in 1881, The Monastery of Kalopetra  functioned as a cloister, which was in great prosperity until the early 20th century.

It was founded by Alexandros Ypsilantis, a Greek prince, ruler of Wallachia and Moldavia, during his exile in Rhodes. Ypsilantis was engaged in various war activities against the Ottomans. His grandson was the leader of the "Filiki Eteria" (or, Society of Friends), a secret organization founded in 1814 in Odessa that began the Greek Revolution against the Ottoman occupation in 1821.

It is believed that Ypsilantis brought his daughter in the area to cure her from tuberculosis, as the water that sprung from a rock of the mountain was considered to be therapeutic. In gratitude, he founded this small monastery dedicated to Virgin Mary giving the name of "Kalopetra" that in Greek means good stone.

Its economic prosperity was based on the cultivation of the land, but also on the exploitation of the oil of the oriental sweetgum tree (Liquidambar orientalis), abundant in the area, which in liquid form had medicinal properties, and in solid form was used as incense. At the same time, the watermill in the adjoining valley secured the required annual flour harvest, while beekeeping and sericulture seemed to be equally developed. 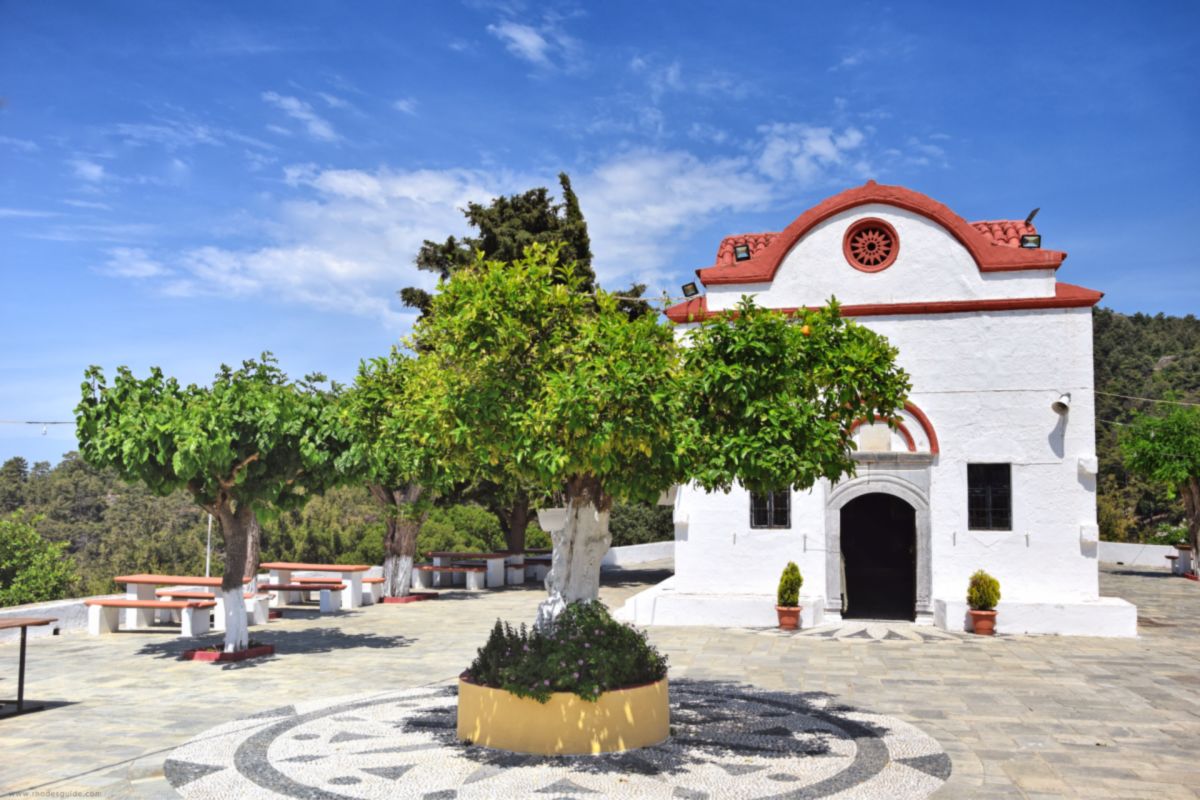 The katholikon of the Kalopetra Monastery was built in 1865 on the site of an older church dating back to 1784, which was destroyed by the earthquakes that struck the island between 1856 and 1863. There are however indications that this church predated the conquest of Rhodes by the Ottomans, forming part of a wider control and communication network of the island's inland. In its present form the katholikon is a one-room building measuring 15x7m, with Gothic features of the cross-class churches of the Dodecanese and individual morphological elements with Ottoman influences.

The iconostasis is wood-carved, partially gold-plated, and follows the typical tripartite division in height. It is believed to have been built before 1862, as this chronology is preserved in the despotic icon of the Virgin, the work of the Cretan Nicholas Hadjiioannou, who also created the despotic image of Christ. The image of the Assumption of the Virgin is housed in a separate pilgrim on the southern wall to the right of the iconostasis. As it bears the date of 1812, it is obvious that it comes from the earlier church built by Al. Ypsilantis.

Tharri Monastery is surrounded by nature, a perfect place to experience calmness and tranquility. The Monastery is well known for its hospitality and attracts many visitors.