"We expect a doubling of arrivals in Greece on the part of the TUI Group in 2022 compared to last year
On the occasion of the announcement of the agreement to establish Co-Lab, Kyriakos Mitsotakis said that "we expect a very good tourist season this year from the start", with Joussen stressing that he expects a doubling of arrivals from the TUI Group side in 2022 compared to last year, meaning that visitors travelling to Greece through the group will even exceed the 2019 levels.

"We believe that Greece will surpass pre-crisis levels and will be one of the winners of the health crisis," Fritz Joussen noted, stressing that the protection measures that Greece put in place and activated during the pandemic were a crucial support for tourism.

Customers felt safe, which was very important for them. I think this is a great achievement and let me thank you for all your efforts," he said.
Participating in the teleconference from the Greek side were Tourism Minister Vassilis Kikilias, State Minister Akis Skertosos, South Aegean Regional Governor Giorgos Hadjimarkos and Rhodes Mayor Antonis Kambourakis. 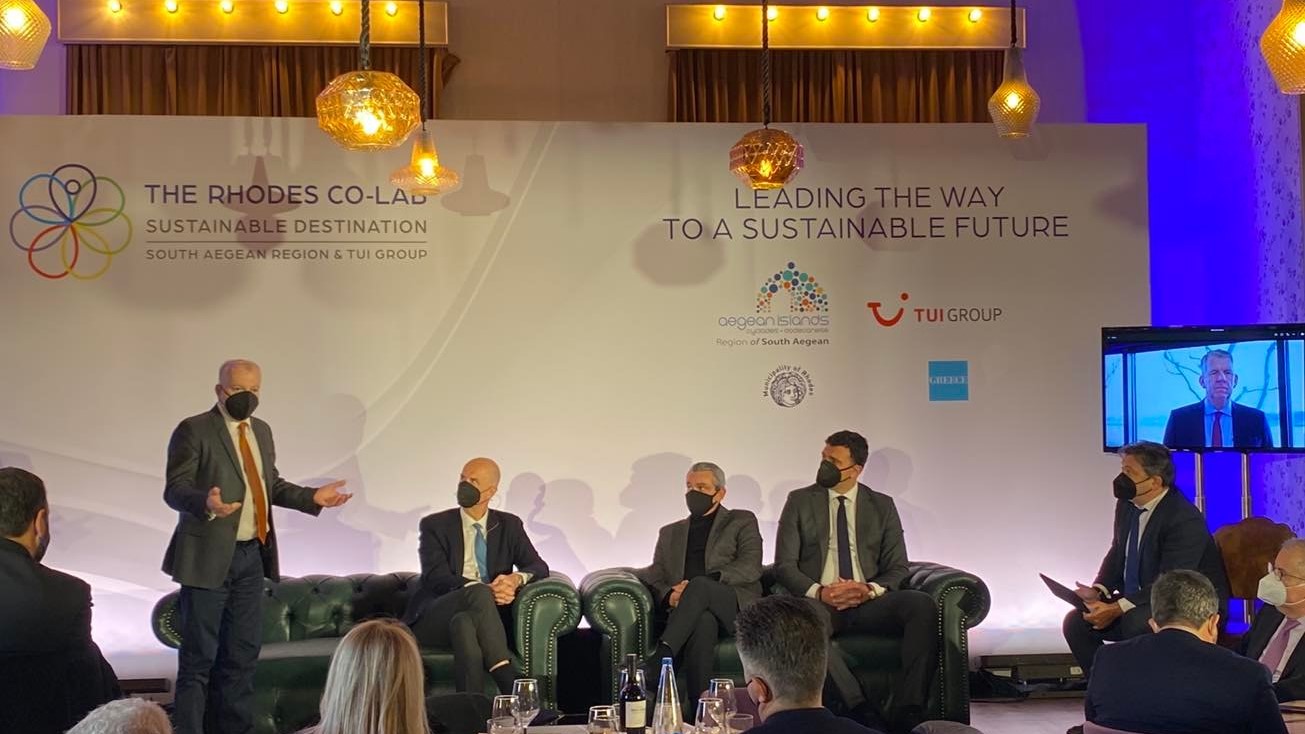 Speaking about the nature of the initiative in Rhodes, following the GR-eco Islands initiative, the Prime Minister stressed that "we want to look to the future and we firmly insist that our new tourism model must be sustainable".

Kyriakos Mitsotakis pointed out that "the green transition is important and we intend to create a separate fund for all Aegean islands so that local communities and municipalities can participate in projects that will focus particularly on sustainability issues".

He also noted that "extending the tourist season is one of the key priorities in our long-term strategy and we believe that many of our destinations, including Rhodes, have the capacity to attract visitors beyond the summer months."

"There is an overarching narrative that goes beyond tourism. I think Greece is clearly a country that is turning a page. It is leaving behind a decade of crises and pain and is a country that now seeks to turn its attention to meeting the challenges of the future," Mitsotakis stressed.

"Sustainable tourism is a strategic priority of Prime Minister Kyriakos Mitsotakis and the Greek Government. And TUI's choice to make Rhodes the world's first sustainable tourism destination is important to us, thanks to the intensive efforts we have made with the South Aegean Regional Governor George Hadjimarkos and the Mayor of Rhodes Antonis Kampourakis," Tourism Minister Vassilis Kikilias said.

"We are working hard and methodically to be leaders in tourism. The work is paying off, as can be seen from the data on bookings so far and, hopefully, in 2022 Greek tourism will be a leading player," said Mr. Kikilias.

Addressing the CEO of the TUI Group, Fritz Joussen, Mr.Kikilias said that "we rely on you as strong partners and we want to work together with stability and consistency to jointly achieve the extension of the tourist season. We expect good prices from you and good offers to our hoteliers".

State Minister Akis Skertos stressed the importance the government attaches to human resources and upgrading the skills of employees in tourism businesses. He noted that significant Community and national resources have been secured for re-skilling and up-skilling programmes for employees and pointed out that Greece is open to the idea of cooperation with the TUI Group and in tourism vocational training, with the aim of upgrading skills and opportunities for retraining employees in the tourism sector.

"Great alliance and vote of confidence"

"This grand alliance, with a global tourism market leader like the TUI Group, I believe goes beyond the narrow boundaries of our shared commitment to this project. It is a vote of confidence for Rhodes, our Region and Greece", said the South Aegean Regional Governor George Hadjimarkos.

"So we are working for the next years, for the next decade as sustainability is the necessary element that will help us go even further. An island of 2.5 million arrivals per year can achieve much more through the joint effort of citizens, the Municipality and professionals", said Antonis Kambourakis, Mayor of Rhodes, on what the project is mobilising in Rhodes. 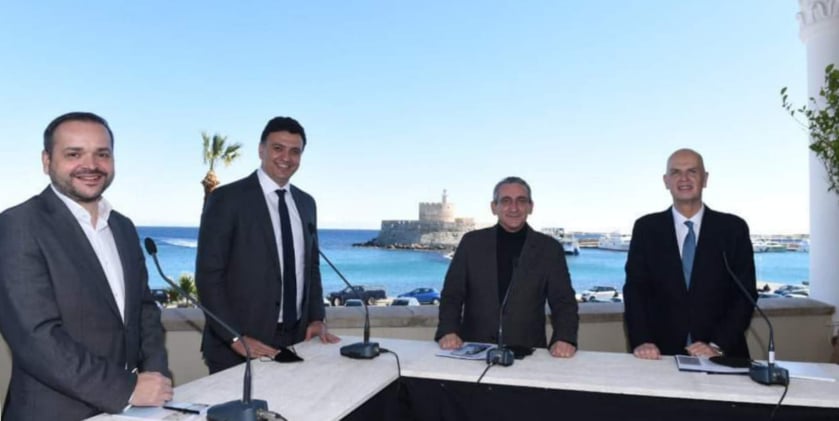 The identity of the first Co-Lab in Rhodes

The agreement for the establishment of the first Co-Lab concerns the development of policies and programmes to ensure sustainable tourism. It was announced yesterday by the TUI Group and the South Aegean Region, in a teleconference with the Megaro Maximou, with the support of Prime Minister Kyriakos Mitsotakis. The TUI Group is one of the largest travel service providers worldwide.

The innovative Co-Lab will be established in Rhodes, aiming to contribute to the transformation of the island into a model of green and digital transformation that will involve the entire hospitality and catering service chain: from hotels and transport to museums and entertainment venues.

In this way, the island of the Knights will offer a tangible roadmap that tourist destinations around the world can adopt. The new workshop will seek workable responses to serious 21st century challenges, such as reducing the impact of tourism on the environment, but with benefits for the development of local economies and inclusive labour markets. The compass for the Co-Lab's action will be the 17 UN Sustainable Development Goals and the European Union's Green Deal.

Co-Lab will also be a hub for systematic cooperation between local government, business and the local community at every stage of the whole process, so that the solutions implemented will be widely supported, meet the needs of the island and be the product of serious consultation of all parties involved. "It is important to underline that at the United Nations when we talk about sustainability, we are not only talking about environmental, ecological sustainability. But also social and economic sustainability," the Prime Minister said for his part.