The ancient Gods – Zeus, Apollo and the rest – certainly knew how to pick their spot. You could hardly imagine them sitting atop Ben Nevis, as opposed to Mt Olympus, and presiding over the Outer Hebrides.

No, they preferred the sunshine, olive trees, the wine-dark Aegean sea and the warm smell of pine.

The Greek islands bask under endless sunshine from April to the end of October. And arguably the best of the weather is in the Dodecanese chain, 260 miles south-east of Athens and within a Zorba’s dance-step of Turkey.

Dodeca means 12 in Greek, but in fact there are 16 islands here, the best-known being Rhodes and Kos. With such long summers, there’s plenty of time to plonk yourself down on a sunlounger on a Dodecanese beach.

Here’s a taste of lively Rhodes and quieter, exquisite Symi… 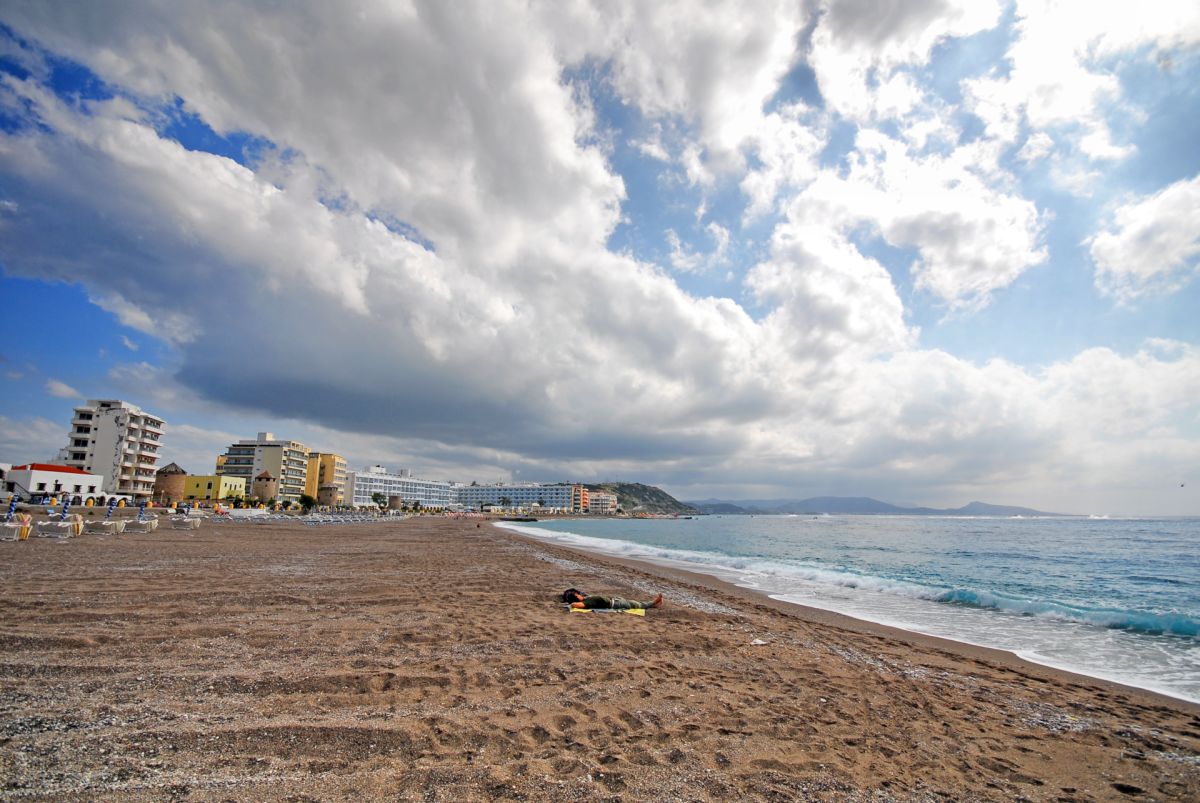 I am staying in an Elite Suite. Don’t snigger. It’s really not that expensive, not for what you get, anyway.

There’s a huge comfy bed, a bathroom in which you could swing a large cat and a mini-bar the size of Westminster Abbey.

What makes it even more special is that outside, through the French doors and beyond the decked patio, is my very own swimming pool. And there I can sit and watch the sun setting below the range of mountains on the Turkish mainland.

The Amathus Beach Hotel tacked these 36 suites on to its existing building in Ixia, on the outskirts of Rhodes Town, some months ago.

There’s a spa – the largest in Greece – on your doorstep and two fine restaurants. And once you’ve had your free pedicure you can stick your flip-flops back on and see what Rhodes has to offer.

The island has some top-class hotels and stunning scenery, with clifftop monasteries, rushing waterfalls and forests of plane and pine trees tumbling down to a patchwork of olive and orange groves. 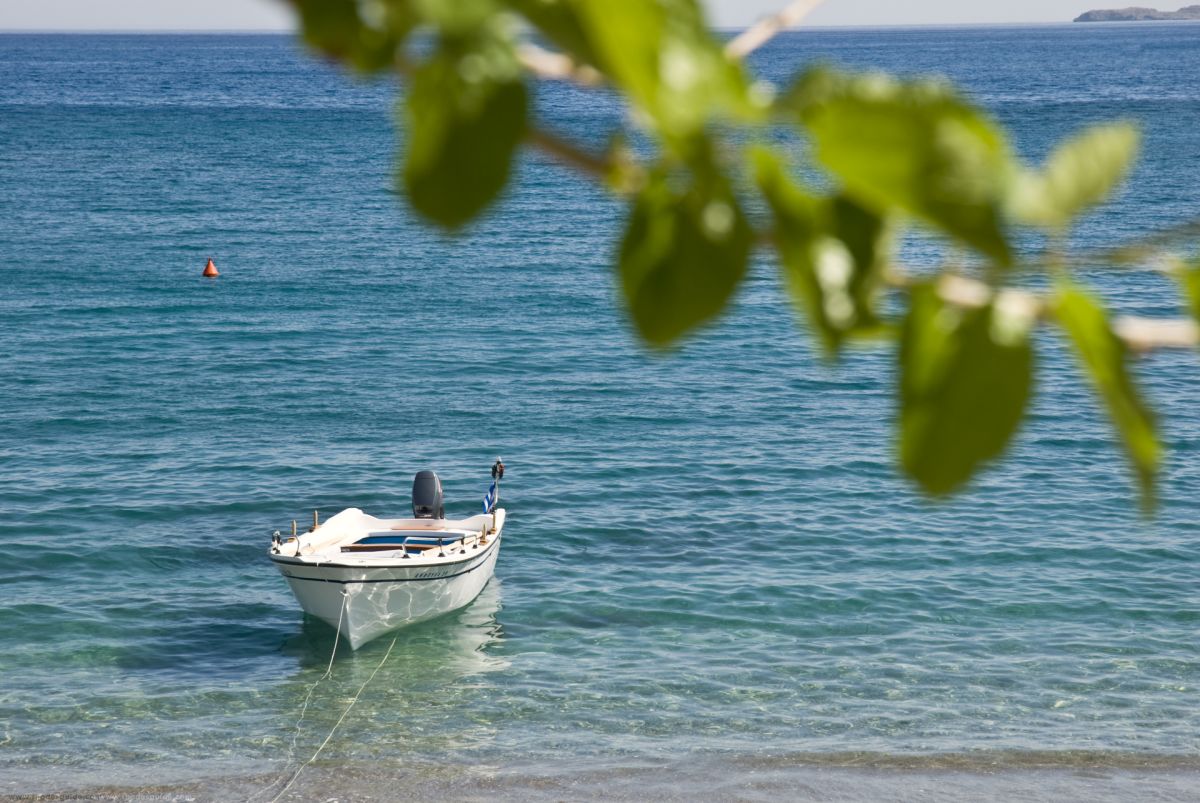 Rhodes is also the jumping-off point for some of the other islands, all easily reached by ferry – stylish little Symi, lively Kos, the sponge-fishing centre of Kalymnos and Halki, a tiny blob in the blue Aegean Sea.

It helps to grasp some of the island’s history before you set off on your travels. For more than 2,000 years Rhodes has been occupied by

In recent times it has been the Italians, who ruled from 1912 to 1943, who have had the biggest influence by restoring many original buildings.

The island’s jewel is Rhodes Town itself, the centre of which sits rather smugly behind a moat built by the Knights of St John in the early 14th Century.

Here you’ll find a labyrinth of cobbled alleyways and ancient buildings, many of which are now shops selling leather goods, gold and silver jewellery.

The streets run down from the Palace of the Grand Masters, now restored to its former glory, past old Turkish mosques to the inner harbour.

The Palace itself is a masterpiece of bleached white stone with a fascinating museum in its cool interior. And like much in Rhodes its renovation is down to the Italians. This had a sinister purpose, however.

Rome dished out the money with the expectation that Mussolini would use the Palace as his holiday home. In the event, he never turned up.

Other buildings were renovated by their Italian owners including the customs houses and municipal offices around Mandraki Harbour. They form a magnificent backdrop to the colourful yachts and ferries busily tying up on the dockside. 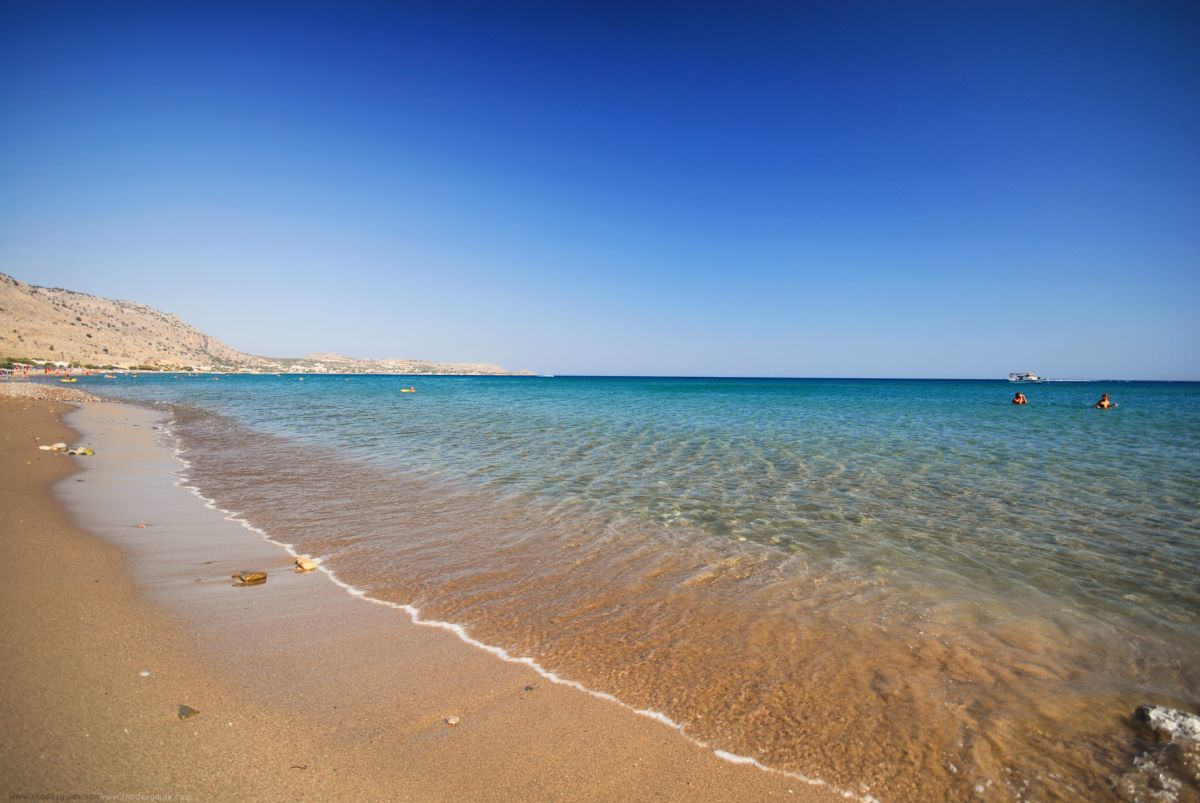 On a hill behind the town  – oddly called Monte Smith, after a British naval officer – is the site of the former acropolis of ancient Rhodes.

There are only a few pillars still standing but nearby is the original stadium where Ancient Greeks held their games in honour of the sun god Helios and it is still an impressive sight.  Head further down the west coast and you’ll hit the small town of Ialyssos.

Turn inland, climbing past fir and plane trees, and at the top of a hill is the ancient site of Ferimos. Here is the monastery of the Virgin Mary, perched on the site of the ancient acropolis.

The monks were on to a good thing – they discovered that the juniper trees and other herbs dotted around made a very good liqueur. They brewed it, bottled it, drank it and then sold it to passing tourists. It is called Sette Herbe and you really shouldn’t take a swig under the ancient oak tree before driving back down the hill.

Further down the coast, turn left at the bustling town of Kremasti and head to the Valley of the Butterflies. Millions of these reddish-brown creatures arrive here every year to mate. 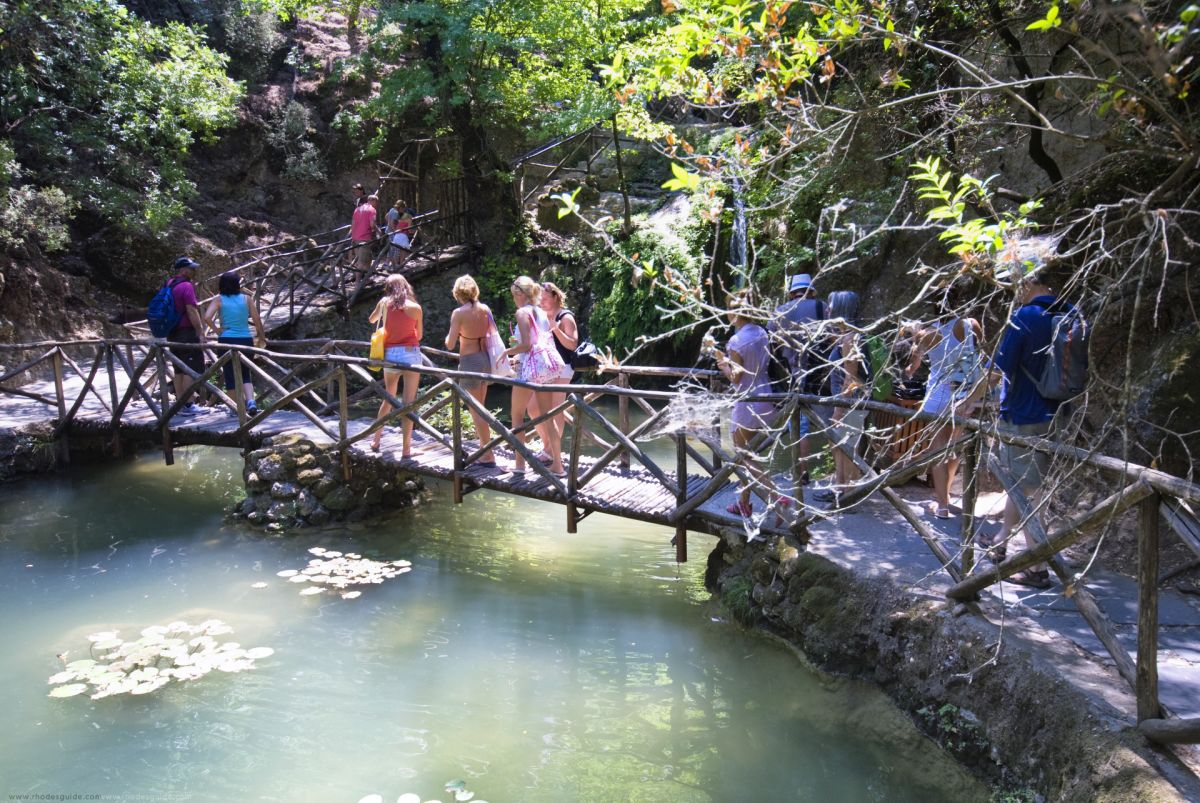 The other main sight on the west coast – it’s the windier side of the island, so always a few degrees cooler – is the former city state capital of Kamiros.

Built in the sixth century BC and only really excavated in the 19th century, it contains the remains of houses, temples, a market-place and several public buildings.

If it’s too hot to do much walking around you can sit in the shade and take in the whole city.

Lindos, on the other side of the island, is no stranger to tourism. The whitewashed buildings – converted to bars, restaurants and apartments – descend to a sandy, if crowded, beach.

On top of the hill, overseeing the pedaloes and windsurfers, is the most photographed building on the island, the ancient acropolis, with its temple to Athena. 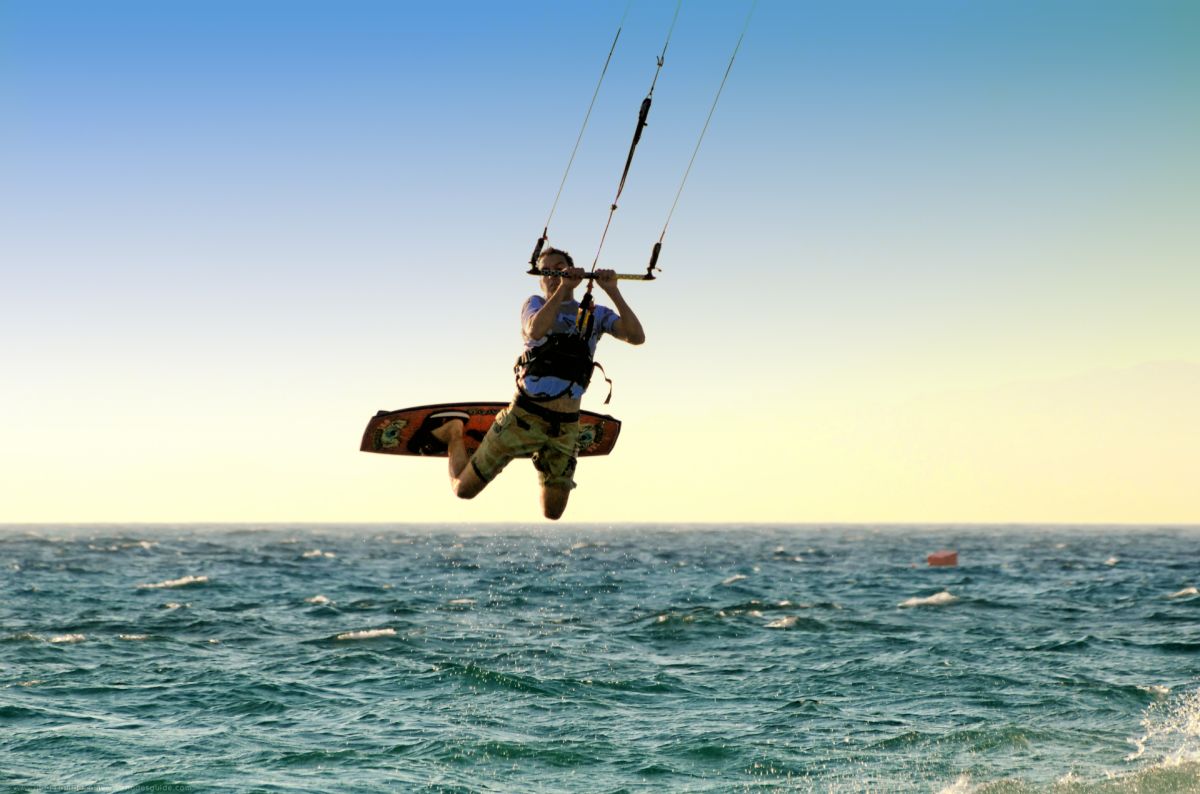 A team of donkeys will take you to the top.

Afterwards have a real pint at the Sunburnt Arms pub run by Rena and Cliff Myers from London (he used to be a professional footballer with Charlton Athletic).

To escape the crowds, head down to Prassonisi, at the very southern tip of the island. Off the sandbar here, windsurfers and kitesurfers make a colourful sight against the white-topped waves. Or head to Kalithea, where hot-water springs and an old spa have been renovated to provide a superb beach retreat with a restaurant.

Rhodians claim they have the healthiest diet in Europe. Mind you, so do the people of Crete. Either way, the food is very similar: plenty of salads with feta cheese, fresh fish and calamari, and olive oil straight from the local factories. 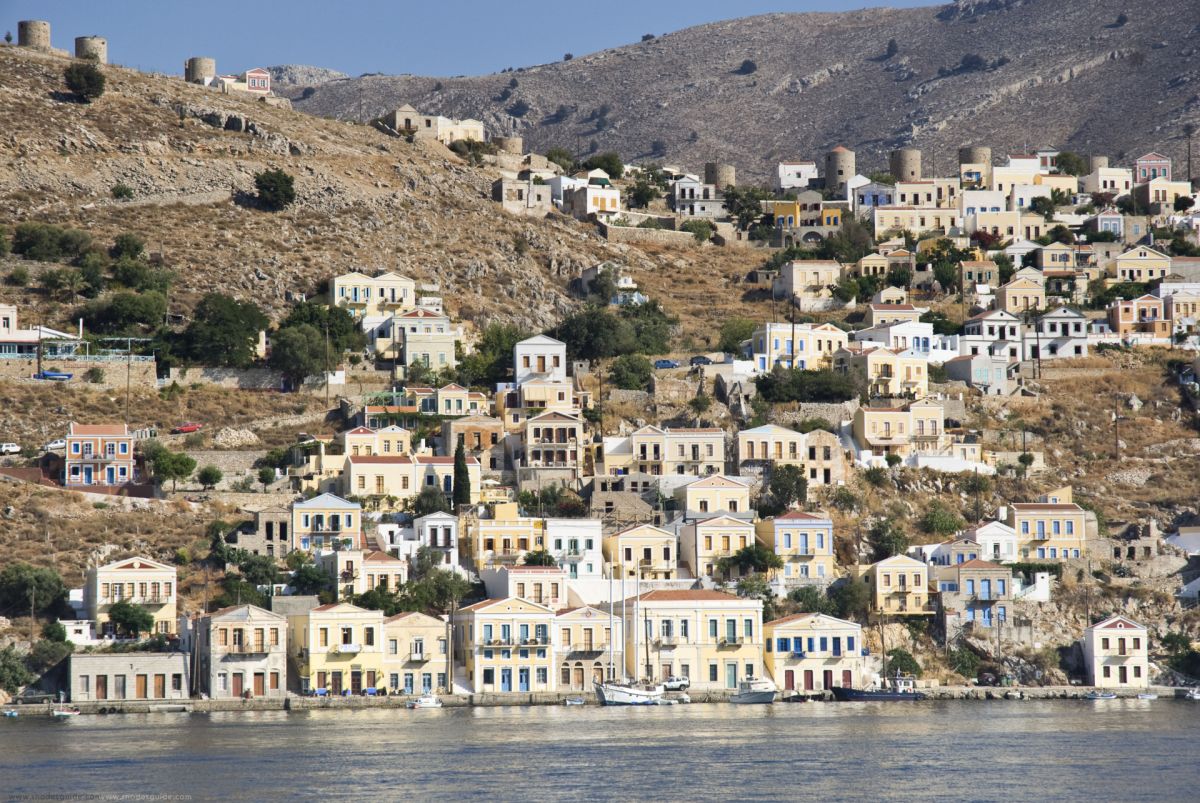 It’s 8.30am and the Aegean Sea is like a millpond as the Symi II ferry putters out of Rhodes Town’s Mandraki harbour and glides between the Turkish coast and the hills and forests of Southern Rhodes. But the best is yet to come.

After a couple of hours, the ferry rounds a headland and there is Symi harbour, the most beautiful sight in the whole of Greece.

Pastel-coloured Venetian houses tumble down to the water’s edge. Shops and tavernas line the harbour, which is filled with big yachts, little yachts, fishing boats and nut-brown children diving into the clear waters.

Symi, Rhodes’ little sister, has a population of about 3,000 – most of whom are involved in tourism and fishing. 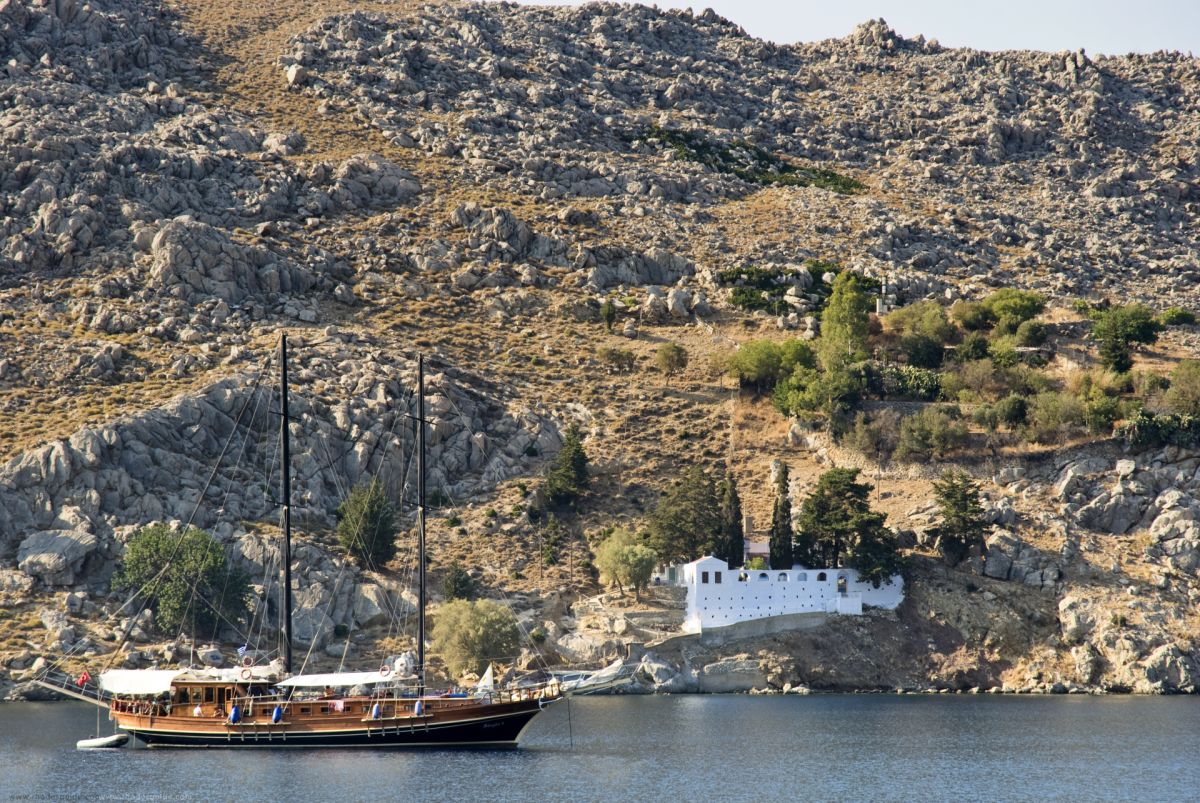 In the summer the island is invaded by day-trippers from Rhodes, yachties and a few people, like me, who just want to wander around the old town, sit under a tree and take a water taxi to the beaches.

You can board the town bus to anywhere on the island (Pedi is worth a trip, or the monastery at Panormitis).

For the more energetic, there are hiking trails across the barren hillsides, dotted with villages and churches.

The little town is packed with tavernas. But for a change from feta and souvlaki, try the Bella Napoli for great Italian dishes.


Dodecanese islands. Rhodes and Symi are fit for the Gods reviews & comments

Your best chance to safely explore Rhodes island at your own pace and preference is by renting a car. With an area of 1412 square kilometers, Rhodes is one of the largest islands in Greece. The driving distance from it’s most northern part - Rhodes Town - to the most southern point - Prasonisi - is 92 km or 108 km depending on the route you will choose.

Read more about Car Hire and Driving in Rhodes Greece